ARENA’s Danny De Schutter has returned from a key international conference in Canada and lists the projects and initiatives that are helping to ensure energy systems around the world are increasingly renewable-friendly. 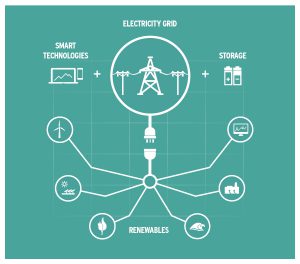 Late last month, I gave a presentation to the 7th International Conference on Integration of Renewable and Distributed Energy Resources (IRED) in Niagara Falls, Canada. In it, I used the backdrop of the recent blackout in South Australia to argue that ARENA-supported projects show that renewable energy can, in fact, maintain or even increase the reliability and security of our electricity system.

ARENA’s purpose is to help accelerate Australia’s transition to a more sustainable, reliable and affordable energy future. Given the public debate following the blackout, it is important that we put the spotlight on the facts and evidence flowing from the work we support. A good example of this is the Virtual Power Plant project we have partnered with AGL to deliver, which will help address intermittency issues by connecting 1000 home batteries together in Adelaide.

There are many other research, development and demonstration (RD&D) projects happening around the world that add to our understanding of how to operate a high renewables grid. Stories about these projects were in abundance at the IRED conference and it was exciting to be given the opportunity to talk directly to some of the researchers and managers running them. Here’s a selection.

Regardless of the definition you apply to these, whether connected or standalone, microgrids provide a good scale-up from the laboratory to the real world, providing the ability to prove that high penetration of renewables can provide stable and reliable supply.

Canada has about 650 remote communities, and like in Australia most are powered by diesel and seasonally unreachable. Some are targeted to be connected to the grid in the next few years, but not all will be.

Canadian Solar created a test bed to help them plan and size microgrids. The facility helps design and test renewable solutions under a variety of loads and types, leading to more successful projects. It is funded by the Ontario Smart Grid Fund, which funds a number of other microgrid projects. In Latin America there are plenty of microgrid projects, and the International Renewable Energy Agency (IRENA) is helping small island developing states reach their renewable targets, some of which have a 100% renewables ambition.

The hope is these solutions should be able to be commoditised and sold per container, but ultimately each project is unique in some ways: load profiles differ, existing generation differs.

Many projects demonstrate how it is possible to create better situational awareness of the distribution network. Most distribution companies do not know what actually happens past the transformer. Smart meters are of course a great asset to have, and are a precursor to some smart grid applications such as Time of Use tariffs, but you can achieve a lot smarter grid without them, too.

For example, a variety of devices are available at limited cost that clip over a wire to give information on the state of the distribution network. Grid 20/20 is one company implementing such devices, using radio frequency (RF) and cellular communications to relay metered data to a central server.

Supercomputing power allows distributors to calculate how to best use distributed energy resources (DER) to support efficient operating of the network. Opus One takes the collected data from monitoring devices one step further. Its GridOS product is essentially one gigantic linear programming tool that optimises the system in 5-minute intervals, using a common communications backbone to control any automated component on the grid, including batteries and renewable energy. This results in improved grid reliability, power quality, utilisation and efficiency, as well as unlocking potential for 100% clean energy.

With more sensors on the network, more data is exchanged, increasing security vulnerabilities. Cyber security concerns are often put forward by utilities when asked to open up their vast collections of data. n-Dimension is one such company that protects critical infrastructure from threats and intrusions. Remarkably, one of the first things they usually find is the amount of power theft a utility suffers from, creating an instant windfall for the utility!

Moving into the technical aspects of grid operations, a number of projects are demonstrating that as renewable penetration increases, DER (Distributed Energy Resources, smaller power sources constructed closer to where the electricity is used) can actually help provide power quality and stability to the system.

Despite all these, it is clear that some changes are needed to accommodate higher penetration of renewables. I picked up two themes from the discussions: interconnection to make a more resilient grid, and regulations.

In terms of interconnection, a number of countries are actively planning changes to their transmission infrastructure to accommodate renewables. China is building several ultra-high voltage DC (UHVDC) connections to transport renewable energy generated in the north-west (wind, solar) and south-west (hydro) of the country to the centre and east, where the highest loads are. In China everything is measured in at least gigawatts, and these UHVDC connections are accordingly big, carrying around 8GW per connection. In total 60GW of connections is needed!

In Europe, an already well interconnected continent, they are studying interconnections for offshore wind farms, thereby connecting UK and Ireland to the mainland.

And regulation? Ah, that old chestnut, I hear you say. Unlike Australia, where the regulator seems steadfast in the belief that National Electricity Objective (NEO) and corresponding regulations are flexible enough to accommodate renewables, other countries are well aware that regulations and rules made for the old world need significant changes.

The efforts from New York through its Reforming the Energy Vision are well known to most in the industry. One striking change they made is to give utilities a 10-year revenue stream from contracted DER; essentially increasing their attractiveness compared to traditional network augmentation. Japan is deregulating its city electricity and gas markets. Italy’s regulator is quite advanced in that it supported six experiments to find ways to get distributors to support areas with high renewables, following a change in its own NEO to promote renewables. Italy is now looking at how it can create appropriate output-based incentives that would ensure adoption of the right behaviour across all distributors, such as observability of distributed generation at substation level with data-exchange to the transmission system operator, or hosting capacity of renewables per substation through improved voltage control.

I also talked about A-Lab, ARENA’s groundbreaking innovation lab, currently in its pilot stage. I came away convinced that what we are doing with A-Lab has as yet no equal. There was a lot of interest in the way the innovation lab brings together the various actors in the sector and drives innovative thinking, put in action through a series of experiments.

Rocky Mountain Institute’s eLab of course does some of this but as a not for profit relies on the participants to fund projects. The Advanced Energy Centre in Ontario is one that not only provides the traditional ‘start-up’ type services such as mentoring and funding advisory, but also drives collaboration with sector participants through a structured program of activities including a utility market game.

One of the key defining features of A-Lab is the creation of experiments, small scale projects that help to inform the future through testing of specific hypotheses. With these experiments ARENA is really leading the system transformation, judging from my conversations afterwards with conference participants.

I left Niagara Falls with a renewed sense that, all around the world, there is a huge activity happening to transform our energy system to one that accommodates a very high share of renewable generation. There were delegations from Japan and Korea through India and Europe to the Americas. The projects on display were important for two reasons: firstly, every demonstration is different in some way, because of the location, demand profile, regulation and other factors; secondly it takes plenty of evidence to be able to move an entire system that by nature is very risk-averse.

One thing that we should be better at is fostering greater awareness and information exchange between all these projects, so we can learn from each other and accelerate the body of evidence that ultimately will tip the scales. ARENA has taken steps towards this by collaborating with Energy Networks Australia (ENA) to develop the Stocktake: Database of renewable energy grid integration projects. ENA has taken on maintenance and hosting of the Stocktake, and will launch the interactive online version in December 2016.

This article was written by Danny De Schutter.

ARENA has launched its 2019 investmen... Read more
Solar energy
Australian solar researchers are leading the world. Let’s help them get even better image

All over Australia, popping up across... Read more
Solar energy
Off the grid independence for Rottnest Island image

It’s a long way as the crow fli... Read more
Solar energy
View all related stories
Follow Us
Back to top