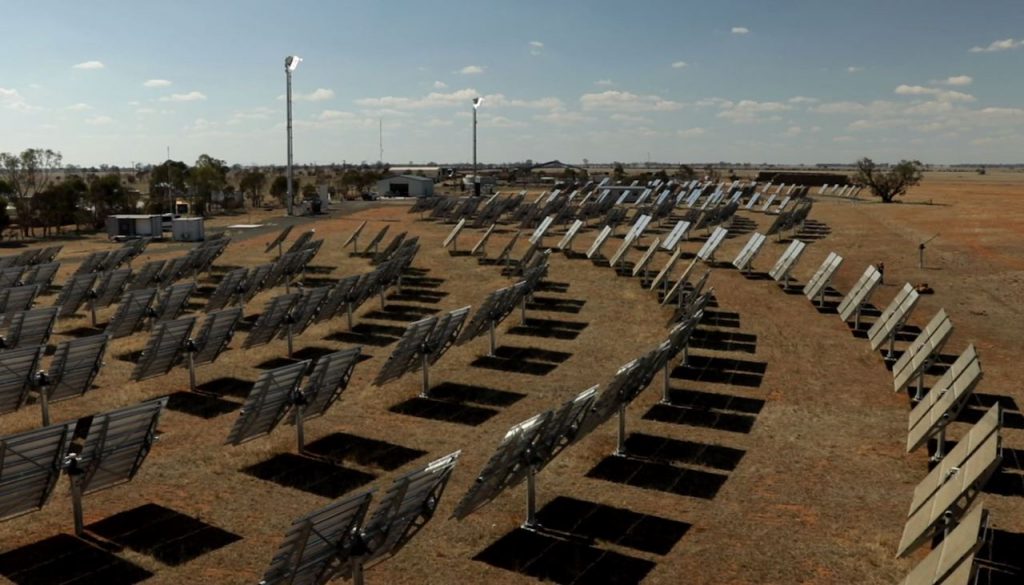 The Melbourne-based clean tech company plans to build the plant at Carwarp, near Mildura. AGL and GHD are partnering on the first stage of the $6 million project, which is on track to be shovel-ready by the end of the year and operating in 2021.

RayGen’s Head of Business Development Will Mosley describes the system as having the economics of pumped hydro and the flexibility of batteries.

“We concentrate sunlight with mirrors and store energy in water. A field of mirrors focuses sunlight onto the tower, and in a world-first we’ve put a photovoltaic panel on top of the tower,” Mosley told ARENAWIRE.

Like a magnifying glass frying ants, the process creates a lot of heat.

“The sunlight is concentrated 750 times into a beam strong enough to melt steel,” Mosley said.

To cool the system, RayGen circulates water through the rear of the panel as it produces electricity. The efficiency of the PV receiver is higher than a conventional solar panel with nearly 90 per cent of the sunlight converted into heat or electrical energy.

While the electricity can be exported to the grid like a normal solar farm, what sets RayGen’s project apart is that they have added storage to provide firm and fully dispatchable power – day or night.

Their two-stage thermal hydro process stores energy as a 90 degree temperature differential between two reservoirs. One of the insulated reservoirs is heated with water that has been circulated through the hot PV panel, while a second is chilled using the electricity generated.

“When you want to watch the footy, we run the hot and cold water through a heat to power turbine [Organic Rankine Cycle engine] which converts the thermal energy into electrical energy.”

RayGen stresses that the economics of the system are already competitive with batteries, but that they can scale the system up by building a bigger pit and adding more water.

“Our partners are excited by the project and want to see how quickly this can scale. Our second project is one gigawatt hour,” Mosley told us.

The hydro storage is estimated to have a 70 per cent round trip efficiency and operates within a sealed system, so consumes no water.

The technology that underpins the new solar hydro power plant has been a decade in the making. Over that time, funding from ARENA – and its predecessor the Australian Solar Institute – has supported RayGen to become a global leader in concentrated solar PV.

Mosley said that the support has helped them to get to the position they are in today.

“ARENA has been with us since we were in the garage! We wouldn’t have been able to make the commitments to technology innovation that are required to achieve this position without ARENA.”

From the three people that started RayGen in 2010, the company has grown to employ 32 people at their headquarters in Melbourne’s eastern suburbs. In this time, they have steadily grown the scale of the projects while making their technology more commercially viable.

In 2016, ARENA funding supported RayGen to construct a 200 KW pilot project at Newbridge, near Bendigo. As well as providing a stepping stone to larger demonstrations of their concentrated solar PV system, the project supplied energy to a local mushroom farm.

When RayGen scaled the Newbridge project up and deployed their PV Ultra system in 2017, ARENA provided $4.8 million towards their $9.6 million capital funding raise.

The RayGen solar energy storage technology trial will help to bolster the region’s electricity grid, which is unable to accommodate new renewable generation projects because of low system strength. The limitations are a growing challenge given the region has been identified as a renewable energy zone due to its rich solar resources.

ARENA is helping to tackle these issues as part of its focus on integrating renewable energy into the electricity network. ARENA CEO Darren Miller said RayGen’s project is an example of a homegrown solar PV innovation.

“RayGen’s solution could complement other more traditional forms of storage such as grid-scale batteries and pumped hydro,” Mr Miller said.

“With ARENA’s funding, RayGen is aiming to prove its novel technology can be cost-competitive with batteries and pumped hydro.”

Over the past year, ARENA has provided funding to a range of emerging energy storage technologies, including Glaciem’s thermal system and Hydrostor’s compressed air pilot.

“While this solar and thermal storage plant works similarly to a solar farm combined with a pumped hydro facility, the advantage of RayGen’s approach is that it can be deployed at a smaller scale and at a much lower absolute cost,” he said.

So hot right now: ANU at the cutting edge of solar thermal image