Solar power is an essential element in Australia’s future energy mix, that much is clear. But it’s not just the solar you most likely know – photovoltaic technology – that will probably replace the coal fired power generators of today. Meet Concentrated Solar Thermal (CST). 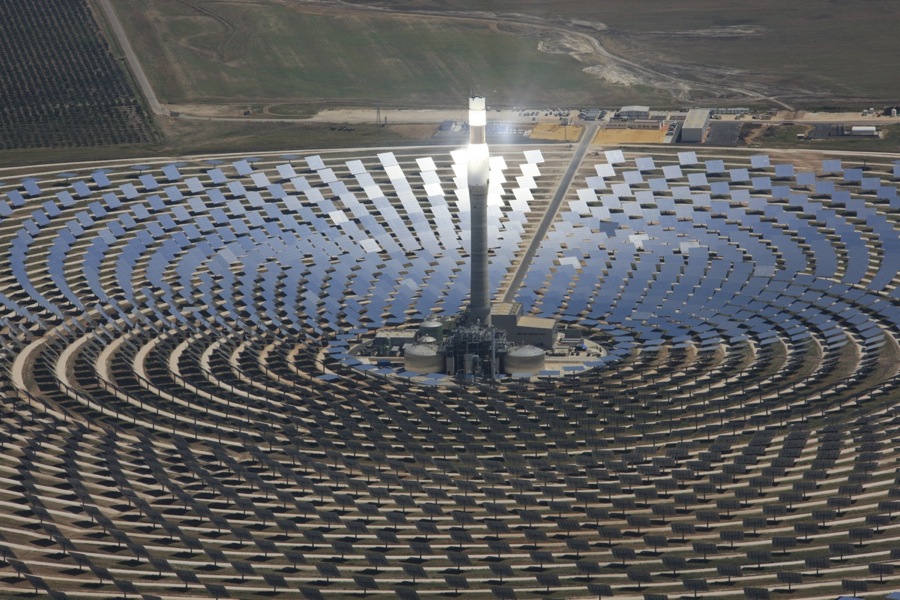 Concentrated Solar Thermal (CST) technology could be one of the answers to long term, renewable electricity supply in Australia.

Some versions of the technology look like dramatic interlopers from a futuristic age. Huge arrays of heliostats point at domineering structures known as “towers of power” like something from a Bond-film villain. Others look like rows of giant gleaming dishes, more at home on the set of a sci-fi movie.

And yet, CST power stations have been operating for more than 30 years. There are now more than 5 GW of installed capacity around the world, mostly in the United States and Spain.

How does concentrated solar thermal work?

CST, like photovoltaic technology (PV), harnesses the sun’s energy and turns it into electricity. The difference between them is that PV converts the radiation directly into electricity, while CST directs a system of mirrors to focus light from the sun to one small point. It then converts the accumulated energy into heat which can be stored before it is later turned into electricity.

While it’s based on the same idea as PV (converting solar energy to electricity) the major advantage CST has over PV is the built in ability to provide up to 15 hours or more of stored energy, long enough to last through the night. That allows it to provide demand responsive electricity outside of daylight hours. And if not used, that stored energy can be retained for many weeks.

Given its ability to deliver stored energy on demand, CST could represent an alternate source for the reliability offered by coal fired generators. But in providing this demand response role, CST is not intended as a replacement for PV or wind technology, rather it would be a complement to them as we adopt more and more renewable energy.

PV and wind turbines have become cheaper and cheaper as ways of generating electricity when they are working, but their output is variable (it needs sun and wind). Because of this they require back up from the national grid or another generator to provide energy when sunlight or wind isn’t available. Battery storage or pumped hydroelectric storage are the subject of much interest as a solution to this but CST could also provide a cost effective solution.

Not for your rooftop

While PV can be installed at the household level or at very large solar farms CST isn’t suitable for small scale installation, it’s a complex system that requires steam turbines and needs economies of scale to make it viable.

The capital costs are currently higher than they are for coal or gas generators of equivalent size, the difference is that there are no ongoing fuel costs, and zero emissions.

Keith Lovegrove, Managing Director of ITP Thermal, estimates that the total cost of energy per MW hour of a new gas fired generator would be roughly the same as a new CST generator, and that’s without considering any potential cost of carbon.

There are a four commonly acknowledged kinds of mirror configurations in CST plants.

Parabolic troughs account for around 90% of the currently operational CST technology. This is the most commercially mature configuration, with 30 years of operation in California proving its viability. However, this method is comparably cost inefficient when it comes to integrating thermal energy storage in standard configurations.

Linear Fresnel is a less mature, but very promising, technology. Research shows it has similar performance as parabolic troughs, but proponents argue is much cheaper to build.

Towers surrounded by mirror fields are the new fashion in CST, and are progressing at pace. About half of all the CST plants currently under construction around the world are tower configurations. At the moment, it appears that the tower/molten salt storage combination is the most cost effective of all the currently installed CST technologies.

Despite the variations in the type of mirrors used, the generator plant configuration almost always remains the same.

Liquid is heated by the light collected from mirrors, transferred to molten salt for storage, and then used to heat water to power steam turbines, the same ones used in old style coal fired generators, but without carbon dioxide emitting coal.

What are we doing in Australia?

ARENA has established the Australian Solar Thermal Research Initiative (ASTRI) to undertake research that will improve the efficiency and operation of future CST systems, while lowering costs. With $35 million in funding over 8 years, ASTRI’s key activities include higher temperature systems and more efficient power generation.

ARENA is currently calling for information from industry participants on the costs and benefits of CST. This information will help ARENA and the CEFC to determine the scope and focus of government assistance for the deployment of CST in Australia.

It is the first step in exploring how concentrated sunlight could generate reliable, affordable renewable energy with built-in storage for our national grids.

ARENA’s new call aligns with the Federal Government’s offer to make up to $110 million available for an equity investment to accelerate and secure delivery of a concentrated solar thermal (CST) project in Port Augusta.

Despite the expectation that proven CST technology will be implemented at Port Augusta, other cutting edge technology might be referenced. Graphite storage and dish systems seem to be most popular technologies to be considered for smaller pilot-scale projects. The options are varied, exciting and potentially game changing for Australia’s energy mix.

This article was originally written by Jane Gilmore, Writer.

As we look back at 10 years since ARE... Read more
Solar energy
Renewable Energy Founder Forum returns to roaring success image

ARENA’s Renewable Energy Founder Fo... Read more
Solar energy
Spending on poles and wires pushes up your electricity bill. It doesn’t have to be that way image

One of the most expensive parts of ru... Read more
Solar energy
View all related stories
Follow Us
Back to top