Many of Australia’s biggest export products are energy intensive to produce and with an electricity market still dominated by fossil energy, that makes them carbon intensive also. 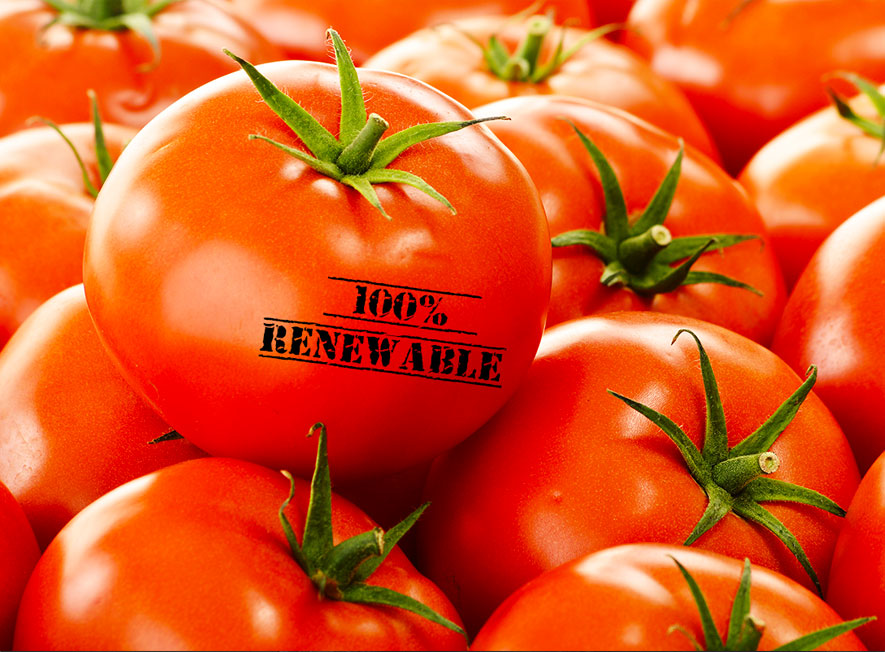 As we shift into a carbon-constrained world, that energy intensity could be a liability (if it isn’t already).

But for those who take the decision to get involved with renewable energy – taking advantage of Australia’s huge potential for wind, solar and wave generation to produce export goods – future opportunities could quickly open up.

What might that look like? Picture a world in which fruit growers export ‘renewable energy tomatoes’, or where you can choose ‘solar-powered aluminium’.

And it could also open up new markets, allowing Australian producers and manufacturers to charge a premium to environmentally concerned consumers.

Together, minerals and resources comprise almost 75 per cent of Australia’s US$246 billion export industries. Of that, iron ore alone makes up 27 per cent.

Our farmers are responsible for the next largest share: Meat exports (both live and the other kind) around 5 per cent and wheat approximately 2 per cent.

Many of these exports are energy intensive to produce – they ‘embody’ a lot of energy, and in most cases that energy comes from emissions-intensive fossil fuels.

As emissions reduction has become an international economic issue in recent decades, so too has embodied energy.

In 2012, Melbourne University climate change academic Peter Christoff wrote that, ‘the relationship between trade and emissions [is] coming under increasing scrutiny. China now has a carbon tax on certain exported goods and France has proposed border adjustment taxes on imports from countries without a carbon price – both moves intended to level the playing field in traded embodied carbon.’

Some experts believe the Paris Agreement may provoke trade measures on carbon intensive goods. Karsten Neuhoff at DIW Berlin has been looking at ways this could play out, investigating the potential for a carbon price on consumption of commodities.

This currently-hypothetical approach would see a consumption tax harmonised across jurisdictions, affecting both imported and domestically produced commodities. It would benefit jurisdictions producing alternatives to emissions-intensive products such as fossil-fuel powered steel, aluminium and cement.

If future trading partners were ever to adopt such measures, Australian businesses would have greater access to markets if they’ve made the switch to renewables to power their production – renewable-fuelled aluminium and iron ore would become highly desirable imports.

Research from the University of Leeds shows that if countries start penalising imported goods that are energy intensive to produce and rely on fossil fuels, the products most likely to be affected are lime and cement, basic iron and steel, refined petroleum, aluminium, inorganic basic chemicals, and pulp and paper

Iron ore is Australia’s biggest export: 786 million tonnes of iron ore were exported in 2015-16 and the massachusetts institute of technology estimates iron ore production uses 20-25MJ per kilogram. Aluminium is another significant export, and its embodied energy is higher than almost all other metals: 200 MJ of energy for each kilogram of aluminium.

In 2014-15, Australia produced 1.6 million tonnes of aluminium creating exports of $3.8 billion. That’s 320 million MJ of energy wrapped up in the aluminium we’re exporting (or 35.84M kg CO2e- of greenhouse gas emissions if the energy used is coal.)

In a future scenario where an international trading system priced emissions, energy-intensive exports produced with fossil fuels could become a huge liability.

Australia doesn’t want to see markets closed to its exports. And some smart companies are already acting to make sure they are well positioned.

Rio Tinto has, with the help of ARENA, invested in solar to partially power its Weipa bauxite mine and processing facilities in north Queensland. Stage one of this project is supplying 20 per cent of the operation’s power, displacing 600,000 litres of diesel each year.

Stage 2, due for completion this year, will increase solar generation and add battery storage, supplying up to 100 per cent of the operation’s power needs.

In Meekatharra, in WA, a 10.6 MW (AC) solar PV power plant with storage is being built to supply 20 per cent of the power required by the DeGrussa Copper Mine. This ARENA-funded project should give other export-oriented miners confidence they too can use renewable energy at mine sites.

Many fossil-fuel-powered mining operations are already off-grid – projects like DeGrussa and Weipa are showing how they can make the shift from off-grid diesel generators to off-grid renewable energy production and storage.

At the farm gate

Australia exports around 30 per cent of its dairy production, in 2015-16 sending around AUD$3 billion worth of product overseas, primarily to Asia.

Dairy Tasmania estimates around 45kWh of electricity (or 162MJ) goes into every kL of milk. In an ever-tightening market, dairy producers are looking for ways to bring their production costs down: switching to renewables as an energy input could be a significant help.

But just as importantly, powering dairy production and processing with renewables could open up new markets, and allow producers and manufacturers to charge a premium.

Australians have already made it clear they want renewable-powered products: ARENA’s Business of Renewables report, carried out by Ipsos, found almost two-thirds of consumers were prepared to pay a premium for goods made with renewable energy.

Australian dairy already has a reputation in China for being clean and safe – highly valuable attributes – and adding green to the list can only boost the appeal.

Agricultural businesses across southern Australia are already taking up the opportunity. In South Australia and Victoria, greenhouse horticultural operations are teaming up with renewable energy producers to grow fruits and vegetables that are not only cheaper to produce, but more appealing to consumers looking for a greener product.

Consumers could be key to driving exporters towards renewables. Demand for such products is springing up overseas. In the US, ethical consumers can now buy diamonds that are cultured, rather than mined. While these stones are incredibly energy intensive to make, that energy is provided by solar power.

High-end sustainable cosmetic company Aveda proudly markets its wind-powered production, LEGO has said it is running entirely on renewable energy while Crayola points out it is protecting children’s futures by manufacturing with solar power.

Smart-phone manufacturers, punished by consumers for their bad record on sustainability and human rights, are now making the shift to renewables as well: 96 per cent of Apple’s corporate facilities run on renewable energy and the company has installed wind and solar projects in six provinces across China where it manufactures. Motorola’s US production is 66 per cent wind-powered.

All of these companies have made the switch not just because it saves money or is ‘the right thing to do’, but because being renewable-powered makes them more appealing to consumers.

And that’s an idea that is probably worth importing.

This article was originally written by Jane Rawson, Journalist.

Connection is an under-appreciated co... Read more
Solar energy
View all related stories
Follow Us
Back to top