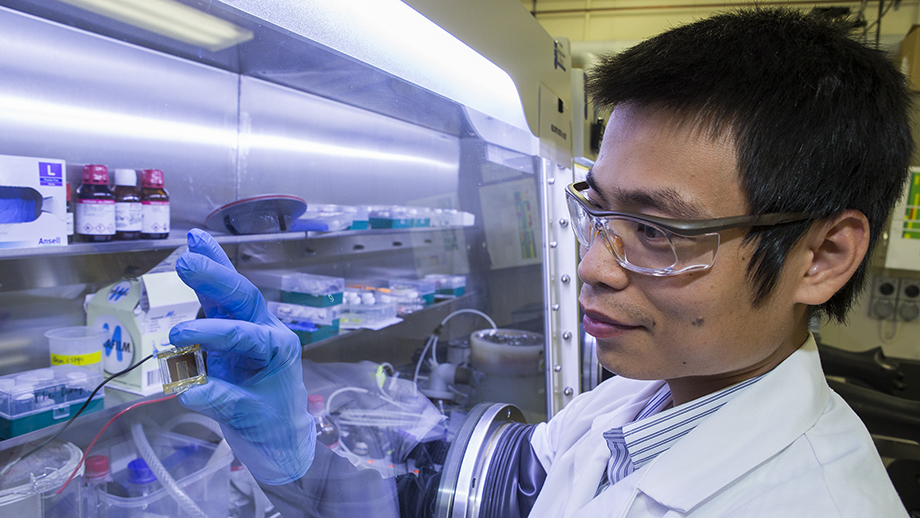 Scientist holding a perovskite cell in the lab.

But two Australian National University (ANU) projects are aiming to change all that. Aided by $1.61 million in ARENA funding as part of a $29.22 million Solar Research and Development Funding Round that comprises 20 projects in total, the ANU projects will help create stable, low-cost and efficient perovskite cells that will push the price of solar power even lower.

Nearly all of the solar cells on the market today are made from silicon. Silicon is a great material, but its efficiency potential is limited – silicon’s chemical properties mean that it converts all colours (or wavelengths) of light into electricity at the same voltage. However, the blue parts of sunlight actually contain significantly more energy than the red parts.

We can capture more energy from the sun by putting a layer of perovskite material on top of a silicon cell and ‘tuning’ it to absorb blue light. The perovskite layer converts the high-energy blue wavelengths in sunlight into high-voltage electricity while letting the red bits pass through to the silicon cell underneath. In the industry this is known as a tandem cell.

But perovskites have a major disadvantage over silicon. “Silicon is essentially a rock,” explains Professor Kylie Catchpole, the ANU PV Lab’s resident perovskites guru. “That means you can put it out in the sun for 20 years and nothing is going to happen to it. Perovskites are easy to process at low temperatures, which is what makes them so cheap. But it also means they are not as stable.”

One of the ANU’s projects will overcome this challenge to develop a stable, mass-producible perovskite tandem cell that is more efficient than current devices.

There are a number of ways to improve the stability of perovskite cells. Adding an extra element, such as Rubidium, to the perovskite crystal structure is one method. Another relatively simple trick involves making sure the unstable compounds are encapsulated properly – an approach that has proven successful for the organic LEDs (OLEDs) used in newer device screens.

The ANU lab already holds the world record for the most efficient perovskite tandem cell. But the team plans to take that efficiency even higher by engineering the device to minimise potential losses. They will also make sure the production techniques are compatible with current large-scale manufacturing techniques.

“We’re working with Jinko Solar, a world leading manufacturer. We want to look at how silicon cells are being manufactured at the moment, and we don’t want to go too far from that process because that will introduce extra costs,” Professor Catchpole says.

If the project is successful, manufacturers like Jinko will be able to mass-produce robust and efficient perovskite solar cells by making only minor tweaks to their existing production lines.

Another reason perovskite solar cells are unstable is to do with their electrodes – the metal contacts where we actually get the electrical current out of the cell.

A lot of metals either react with perovskites, which breaks down the cell’s stability quite quickly, or diffuse through the material, which degrades its stability over time.

At the moment, the most efficient perovskite cells use gold for their electrode contacts. This works well at first, but the metal eventually diffuses, rendering the cell unstable. And the high cost of gold means that improving its stability still won’t produce a commercially viable cell.

This is the problem that the ANU’s second project aims to solve. By measuring different aspects of the solar cell to determine where stability problems arise, the team will develop new types of electrodes that use cheap, stable materials.

‘You can easily get an electrode that is either low-cost, stable or highly efficient,’ Professor Catchpole says. ‘We want all three at the same time, so we’re going to need to develop a structure to achieve that. There are likely to be a few different elements working together. We’re looking at a range of materials and we’re probably looking at several layers in the structure. We expect it to be based on something like copper or aluminium.’

Prototypes of the new electrodes will be put through serious stress testing, facing temperatures of 85ºC and 85 per cent humidity to see if they remain stable under challenging environmental conditions.

The project will make a massive contribution towards commercially viable perovskite cells. ‘We’re hoping for an approach that can be applied to all types of perovskite solar cells,’ Professor Catchpole says. ‘We’d end up with stable, low-cost contacts that could replace gold and really move perovskites forward in terms of their stability problems.’

The Wollert rubbish tip has come a long way image

As we look back at 10 years since ARE... Read more
Solar energy
What is concentrated solar thermal? image

The central Australian town of Alice ... Read more
Solar energy
View all related stories
Follow Us
Back to top