Connection is an under-appreciated component of the complex task of creating big new solar plants for Australia’s electricity system. 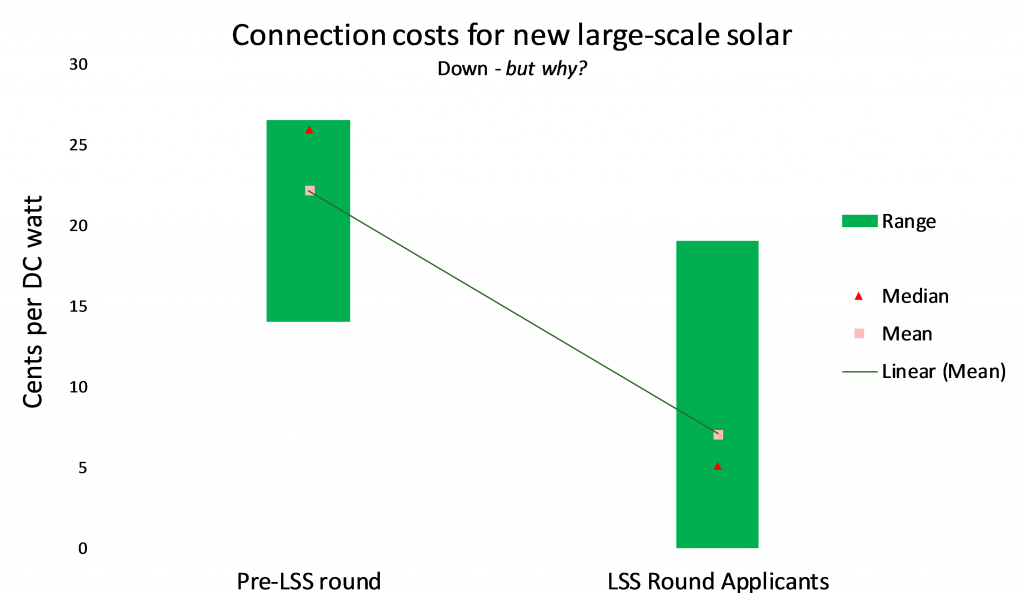 Factors like access to network infrastructure, the amount of new generation that piece of grid can take and the lengths of nearby lines are big parts of site selection. These costs can add up, or they can be minimised through clever thinking – it differs by site.

The twenty competitive round applicants show an average of 7 cents per watt, with more projects in the lower or zero connection costs band. This illustrates a fluid environment for companies looking to plug their big solar into the network, and it opens a fascinating question – why are the costs lower for ARENA’s large-scale solar funding round?

Many winners of ARENA’s LSS round include solar plants co-located with existing power stations, such as wind farms, which would reduce connection costs. The ARENA-funded study into co-location of wind and solar plants found that:

Major savings can be obtained in the grid connection infrastructure and installation, operation and maintenance and development costs (including land costs, development approvals and studies).

There’s little doubt these effects have been borne out in the cream-of-the-crop projects that featured in ARENA’s large-scale solar funding round.

Another potential explanation is relatively simple – our call for applications encouraged aggressive competition among the bidders (it wasn’t called a competitive round by accident). This well-designed process lead to bidders choosing sites for their cost-effectiveness, and the connection data ARENA has gathered almost certainly reflects this.