Over the past decade or so, improvements in the efficiency of mass-produced silicon cells have caused the cost of solar to plummet. But we’re about to hit an efficiency wall – the physical properties of the most popular commercial silicon cells make it extremely difficult for them to convert any more than 25 per cent of the energy in sunlight to electricity. 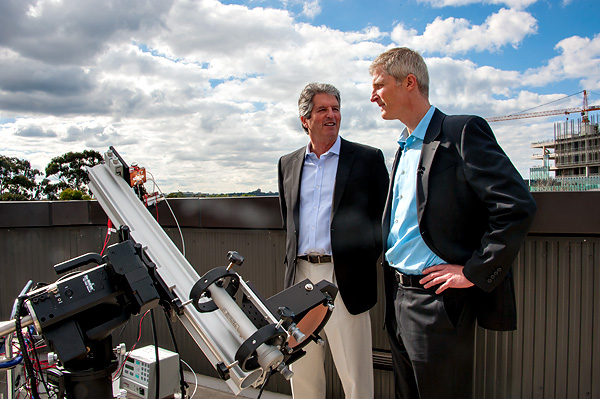 To break through this limit, a team at UNSW is going to take solar cells to the next level. Or more accurately – the next layer.

Led by the godfather of Australian photovoltaics, Professor Martin Green, the project picked up a $3.18 million grant in ARENA’s recently-announced Solar R&D round.

Their aim? To develop a next-generation tandem silicon cell using a previously unused class of materials.

What is a tandem solar cell?

Sunlight is actually made up of lots of different colours, or wavelengths, of light, and the blue wavelengths contain a lot more energy than the ones at the red end of the spectrum. But silicon responds the same to both red and blue wavelengths.

The efficiency of a solar cell can be improved by putting a thin layer of another material on top of the silicon wafer, forming what’s known as a tandem cell. If we choose the right material, it will convert the high-energy blue light into high-voltage electricity while letting the red light pass through to the silicon layer as usual. As a result, more overall energy is extracted from the sunlight.

READ MORE: HOW OUR SOLAR RESEARCHERS ARE LEADING THE WORLD

Nearly all of the materials that convert sunlight into electricity efficiently are so-called adamantine compounds, which means they have a similar chemical structure to diamonds. But most of the adamantine semiconductors suitable for tandem solar cells are either toxic, unstable or very rare (and hence very expensive).

To take mass-produced commercial cells past the 25 per cent efficiency limit, researchers need to find an adamantine material that satisfies the holy trinity of safe, stable and abundant.

Professor Green’s research centre has already set an efficiency record for a material that meets these criteria – a compound of copper, zinc, tin and sulphur (or CZTS for short). But a CZTS cell that is efficient enough to be commercially viable is still several years away. UNSW’s latest project aims to find an all-new adamantine material that can be commercialised very quickly.

Earlier this year, Professor Green dusted off his periodic table and started looking for photovoltaic compounds that others might have missed. ‘I became very familiar with the issues and was thinking about it a lot,’ he says. ‘I realised people had overlooked a group of materials that were likely to form adamantine compounds.’

By delving deeper into the chemistry, Professor Green was able to add ten new families of adamantine semiconductors to the seven that were previously known.

His team has run supercomputer simulations of some of these new materials, identifying several stable compounds that could work as the top layer of a high-efficiency tandem solar cell. The next step will be synthesising and tweaking these materials in the lab to explore their photovoltaic properties.

‘We’re hoping that among all these new families we’ll stumble across one that it is easy to get high efficiency from, but which is also stable and won’t involve any toxic elements,’ Professor Green says.

Of course, dealing with all-new materials comes with a fair few challenges. ‘Some of these materials we don’t have much experience with, so we will need to set up new capability to make them,’ Professor Green says, ‘Once we have a material, we need to work out how to make a good solar cell out of it, and that’s the bit computers can’t help with – it takes luck, hard work, determination and inspiration to find a path through. But the fact we’ve done better than anyone else with CZTS shows we have the best chance of any group worldwide of doing this quickly.’

A pathway to production

At the end of the four-year project, the team plans to have a prototype tandem solar cell with an efficiency greater than 25 per cent. They are also hoping to have a production process for the cell that will allow their commercial partners – Jinko Solar, LONGi Solar and Trina Solar – to start manufacturing the technology on a larger scale.

Professor Green thinks that with widespread industry adoption, commercial adamantine thin-film tandem cells will be pushing 40 per cent efficiency within a decade or two. And that will see the cost of solar power fall even lower.

‘Solar is going to be so cheap soon that you’ll use it for every application, even the ones that you might have had to think hard about before. It will be a no-brainer,’ he says.