When APA Group bought the Emu Downs Wind Farm in 2011, the new owners faced a challenge: how do you guarantee a steady supply of energy throughout the day? 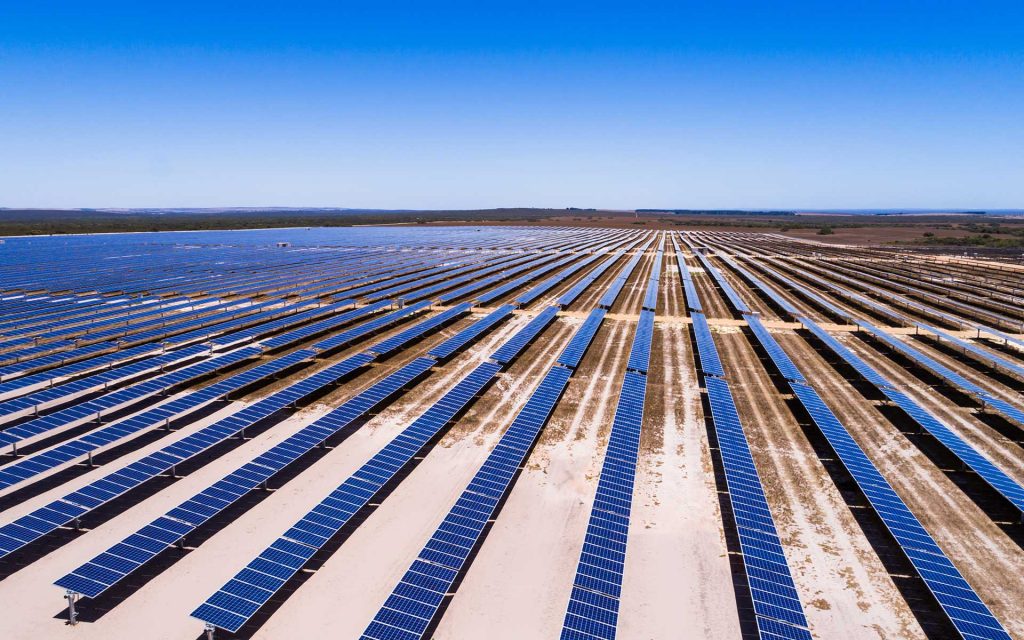 Arial view of the wind and solar farm at Emu Downs.

The Emu Downs Wind and Solar Farm, a 48-turbine farm that was constructed in Western Australia in 2006, stands on a site featuring two dominant wind resources. In the morning, wind blows from the east, while in the afternoon, the Fremantle Doctor sweeps in from the west. In the middle of the day, however, the wind dips, resulting in a fall in energy production at the 80-megawatt wind farm.

The solution? A 20-megawatt solar farm built on the same site to complement the prevailing wind resource, using the existing transmission connection infrastructure.

The size of the solar farm is an important element in its design. “Twenty megawatts sounds like an arbitrary number, but it was what our modelling produced,” says Pegg. “We didn’t have to increase the size of our substation or increase the connection point and we were able to squeeze 20 megawatts of solar in there without too much curtailment.”

Now, he says, the 80-megawatt wind farm and 20-megawatt solar farm produce 100 megawatts of energy that pass through the existing 80-megawatt connection point.

The Emu Downs Solar Farm (EDSF) features 75,000 photovoltaic panels spread across 70 hectares on a site adjacent to the wind farm, 200 kilometres north of Perth and 30 kilometres west of Cervantes.

The $50 million project has been operational since December 2017, when it was finished three weeks ahead of schedule.

EDSF forms part of the first co-located solar and wind farm in Western Australia, and one of the first in the country. As well as providing complementary energy resources, co-location delivers cost savings through the use of shared infrastructure, including the substation and the connection point, and “any operating synergies that might exist,” says Pegg.

APA Group has entered into a power purchase agreement to sell electricity and generation certificates generated by the solar farm to energy provider Synergy to 2030.

ARENA provided APA Group with $5.5 million in funding for the project, one of 12 of solar farms that won funding through ARENA’s multimillion-dollar large-scale solar round in 2016.

The development of large-scale solar has leapt ahead in recent years in large part to ARENA’s funding scheme, says Pegg. “It was an important step for the industry.”

In 2011, when APA Group first developed plans for the solar addition to the wind farm, solar was prohibitively expensive, he says. “It was at least a couple of hundred dollars per megawatt-hour, compared to wind, which was perhaps half the price.”

Back then, Pegg notes, the largest solar plant in the country was 10 megawatts. Today, the 12 solar farms that ARENA has commissioned will triple Australia’s large-scale solar capacity from 240 MW to 720 MW and power 150,000 Australian homes.

ARENA CEO Mr Ivor Frischknecht said the completion of the Emu Downs Solar Farm was a significant milestone for renewables in Australia.

“Before ARENA’s strong investment, large scale solar remained in its infancy in Australia,” he said. “The competitive round was critical in supporting the technology to becoming competitive and helping to close the gap that exists between large-scale solar PV and other commercially competitive forms of power generation, including wind energy.

The Energy Innovators: A solar boost to the mining industry image

Could the rise of renewables be good ... Read more
Solar energy
How do solar panels work in apartments? image

There are a few certainties about lif... Read more
Solar energy
The secret to a truly ‘noteworthy’ solar cell, brought to you by CSIRO image

It was more than a moment. More than ... Read more
Solar energy
View all related stories
Follow Us
Back to top