Australian solar manufacturer 5B is set to scale up delivery of their innovative low cost solar product, the 5B Maverick, with the help of a $14 million grant from ARENA. 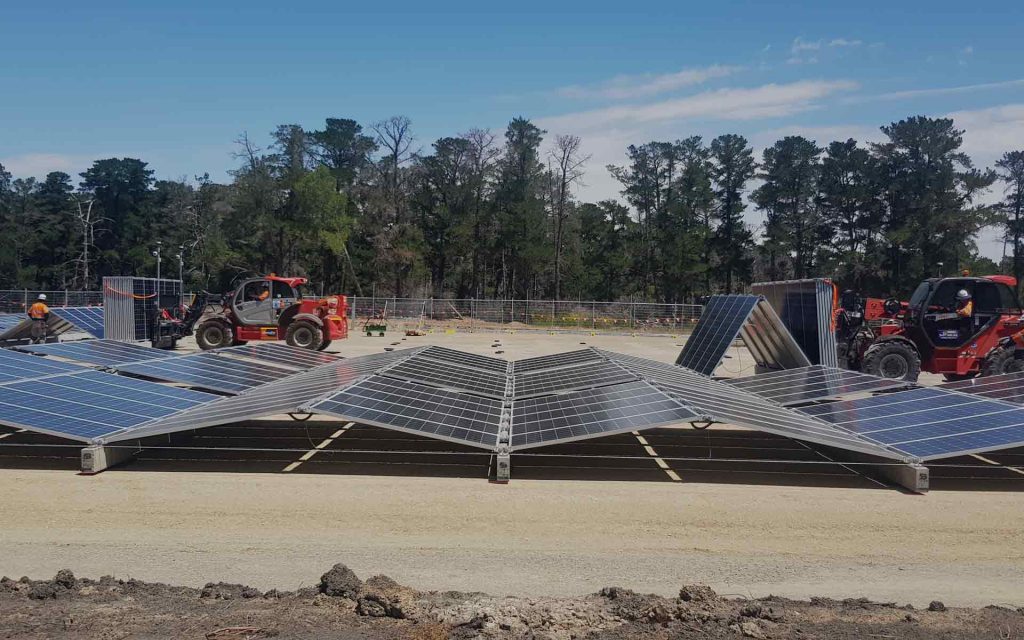 5B's Maverick solar PV technology being deployed in the field. Image: 5B

What is the 5B Maverick project?

5B’s $33.4 million project will aim to automate the manufacturing and deployment of the prefabricated Maverick, reducing the cost of the solar technology and speeding up installation times.

With the support of ARENA, 5B will design and implement a high volume, scalable and predominantly automated manufacturing line at their headquarters in Mascot, New South Wales.

Founded by Sydney-based solar Chris McGrath and Eden Tehan, 5B launched the Maverick in 2017. Since then, their Maverick solar arrays have been used in 52 projects with a total capacity of 32 MW across the globe.

How does 5B Maverick technology work?

Maverick is a prefabricated, modular, east-west solar array that is built and pre-wired in the factory to enable a rapid “plug & play” deployment on site.

5B hopes that the modular, prefabricated nature of Maverick will allow field robotic systems to deploy the technology on site, reducing the personnel required for installation to lower costs and minimise safety risks.

ARENA CEO Darren Miller said the funding for 5B would help reduce the cost of solar.

“While solar PV and wind are recognised as the lowest cost form of generation in Australia today, further cost reductions are required to optimise Australia’s transition to renewable electricity and to enable emerging industries such as renewable hydrogen and low emissions metals.

“5B is an Australian success story at the forefront of solar innovation. Having started in 2013, they are now becoming leaders in locally manufactured ultra low cost solar products that could reshape our solar industry and achieve our important aim of 30 cents per installed watt at utility scale by 2030.”

5B Chief Operating Officer Nicole Kuepper-Russell said: “The world needs massive scale, ultra low cost solar power fast and this funding will accelerate the delivery of that. It gives us the opportunity to build Australia’s reputation as a clean energy superpower, exporting cutting edge clean technology to the world.”

Low cost solar on the horizon

5B’s efforts to reduce the capital costs of solar technology are strongly aligned with the Australian Government’s approach to achieving net zero emissions with the help of technological innovation.

Ultra Low Cost Solar was added as a priority technology in the Government’s Low Emissions Technology Statement in 2021, with a stretch goal of reducing the cost of large scale solar to $15 per megawatt hour.

ARENA has supported these efforts by developing its own ambitious target of “Solar 30 30 30” which strives for 30% PV cell efficiency and a cost of 30 cents per watt installed for solar farms by 2030.

Achieving this goal means improving solar cell efficiency to yield more power from each solar panel, but also innovating in manufacturing and installation to bring down the total cost of solar farm installation.

With Maverick’s module-agnostic design, further developments in module efficiency and cost could make the product even more appealing to developers as next generation PV cells can be easily incorporated into a Maverick array.

5B are currently undertaking a series B capital raise with a target to complete their automation program by late 2023.

The Wollert rubbish tip has come a long way image

As trucks rumble along and disgorge t... Read more
Solar PV R&D
The Energy Innovators: A solar boost to the mining industry image

Over the past decade or so, improveme... Read more
Solar PV R&D
Australia’s most renewable suburbs image

They are the places where renewable e... Read more
Solar PV R&D
View all related stories
Follow Us
Back to top