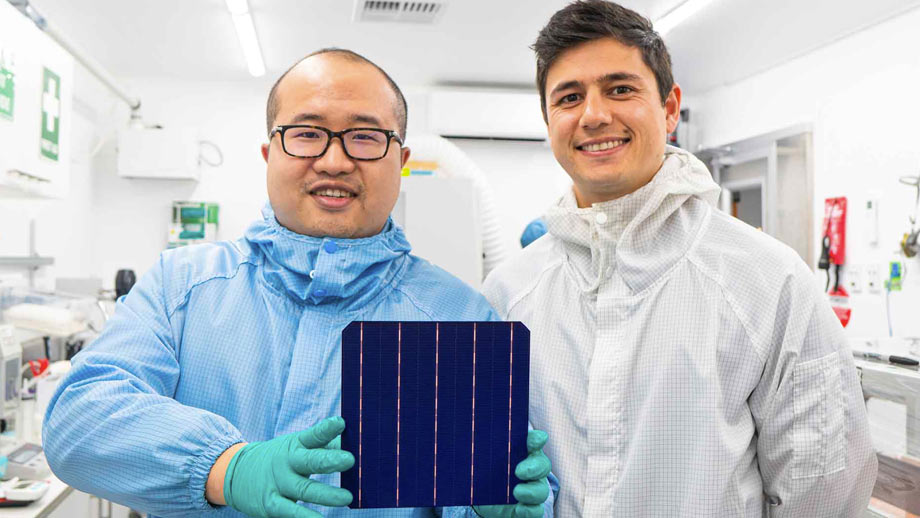 The low cost of solar panels from affordable solar cells is transforming the way we generate electricity, but a Sydney startup is banking on new technology to drive prices down even further.

Aiming for higher efficiencies and lower manufacturing costs, SunDrive has set out to produce affordable solar cells in Australia from common and affordable materials.

A core component of today’s solar panels is silver – a precious metal that is in limited supply. The solar industry already consumes 20 per cent of the world’s annual industrial silver, and attempts to move to the next generation of high efficiency cell structures – such as tunnel oxide passivated contact and heterojunction – requires two to three times more of the highly conductive metal.

SunDrive’s solution is to replace the expensive silver with comparatively common copper. Their next phase of development will scale the technology to assemble complete solar panels made up of between 60 and 72 of their individual cells.

“We’re only at the very early stages of where the industry can be with only three per cent of the world’s electricity currently coming from solar. If we want to get to 50, 60, 70 per cent and beyond, we’re going to need a lot more solar cells and that’s a massive challenge,” Allen said.

The company is embarking on a new project to commercialise its technology, hoping to produce affordable solar cells and improve the efficiency beyond the levels attainable with silver.

According to Allen “today’s mainstream solar cell technology is getting quite close to its practical limits in commercial production with a lot of manufacturers very aggressively pursuing other silicone solar cell structures that are more efficient.”

But with more efficient designs needing more silver, one barrier may be overcome while exacerbating the other. SunDrive is not the first to tackle the problem, but its unique copper processes put it at the forefront of the industry challenge.

One company to invest in alternatives to silver was Suntech, led until 2013 by fellow UNSW alumnus Dr Zhengrong Shi, who was also SunDrive’s first angel investor. In addition to $3 million in ARENA funding, SunDrive is also backed by Blackbird Ventures and Mike and Annie Cannon-Brookes private investment company Grok Ventures.

The startup is grateful to be supported by solar experts with a strong track record and welcomes the unique perspective offered by venture capitalist funds Blackbird and Grok.

“Everything that we are trying to do is very ambitious. We need the best people on board, and that includes the best investors,” Allen said

Announcing the ARENA funding, CEO Darren Miller said it’s exciting to see an Australian solar startup at the forefront of the next generation of solar cells.

“The current solar cells we use, while having served us well, have almost reached their efficiency limits,” Darren Miller said.

“Through technological innovations from startups like SunDrive, Australia will continue to remain at the forefront of solar innovation and research and development for years to come,” he said.

SunDrive’s CEO and co-founder Allen studied at the University of New South Wales alongside researchers that have held world records for solar efficiency for 30 of the past 37 years. When he started his undergraduate studies in 2007, UNSW offered the only bachelor degree in the world focused on solar energy and engineering.

Seven years on, Allen – alongside co-founder and undergraduate flatmate David Hu – developed early iterations of their solar cell technology in a Maroubra garage. After a five-year stint in Wollongong, the company is now relocating to Kirrawee in Sydney to scale its operations, growing their team from six to 16 as part of the work to commercialise their solar technology.

They aim to produce the cells locally, optimistic that they can compete with large solar manufacturers in Asia while protecting their intellectual property.

“The industry today is at a point where the land and labour costs are becoming less and less significant in the total cost of manufacturing… obviously it does mean that we need to at least match that similar level of automation and throughput, but we do see opportunity to do it in Australia,” Allen said.

When APA Group bought the Emu Downs W... Read more
Solar PV R&D
Portable solar panels when you are on the go! image

Households with solar in constrained ... Read more
Solar PV R&D
View all related stories
Follow Us
Back to top