ARENA is working hard to accelerate the shift to a more sustainable, affordable and secure energy system. I want to tell you a story about an exciting wave power generator project. 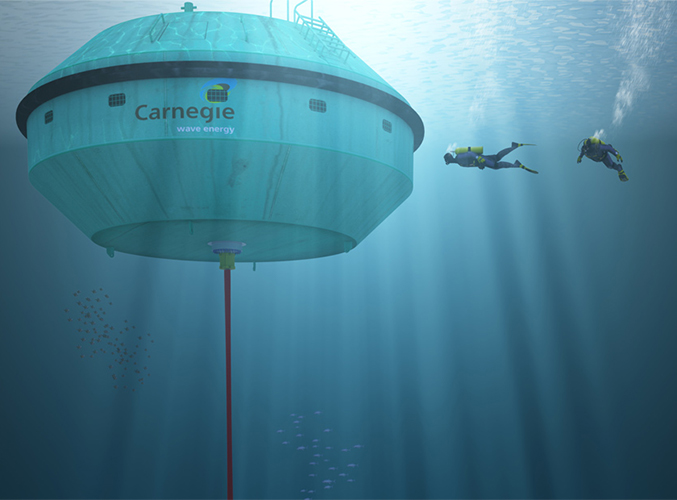 The wave power generator is not just part of our marine power portfolio at ARENA. It’s an epic tale of adventure on the high seas! It’s about dreamers, who spent years developing, testing, refining and re-testing their technology; all the time looking to find the best way to harness the power of the ocean.

The CETO5 wave energy project is a perfect illustration of this. It’s the fifth generation of Perth company Carnegie’s world-leading wave energy conversion device. The project tested three quarter-scale devices set in an array – like a small wind farm.

Each one costs as much as a Supermaxi in the Sydney to Hobart – but instead of three days battling against the elements, Carnegie navigated – with ARENA’s help – more than three years of challenges from the drawing board through construction, deployment and maintenance to final results.

The CETO5 demonstration operated for more than 13,000 hours, providing valuable data on the device’s energy conversion performance and on how to deploy and maintain a wave array at sea. It’s the first successful grid-connected wave array demonstration in the world.

Next steps are the test of big sister CETO6 – the full scale version – proving how wave, solar PV and storage can combine to deliver power at a price cheaper than diesel for remote coastal and island communities.

So what’s the big deal? Why have we invested so much money, time and effort into this area, particularly when the technology lies like sunken treasure beneath the waves?

Ultimately the answer is the potential value of marine energy to Australia’s future energy mix – in particular wave.

The CSIRO’s Alex Wonhas has said that wave energy could provide as much as 10 per cent of Australia’s future electricity needs by 2050 – that’s roughly enough electricity to power Melbourne.

Perhaps. But it’s worth remembering that as distributed solar take-up increases, and the summer peak electricity demand starts to flatten, the winter peak stays relatively stable. If that trend continues, by the early 2030s, Victoria’s winter peaks could be higher than summer, meaning there may be a place for a high-yield, low impact winter source of energy (such as wave).

Carnegie is probably the most advanced wave company globally – but there are challenges (and challengers) along the way. Like battery storage and biofuels, wave energy in particular needs to stack value or realise other value streams (such as the island power market) to be competitive in the near term.

So next time you’re at the beach, spare a thought for those dreamers working away on turning the motion of the ocean into the energy of tomorrow.

This article was written by Andrew Newman, former ARENA strategist.

It might look like something out of a... Read more
Ocean energy
What is tidal energy and how does it work? image

The tide is renewable and relentless.... Read more
Ocean energy
View all related stories
Follow Us
Back to top