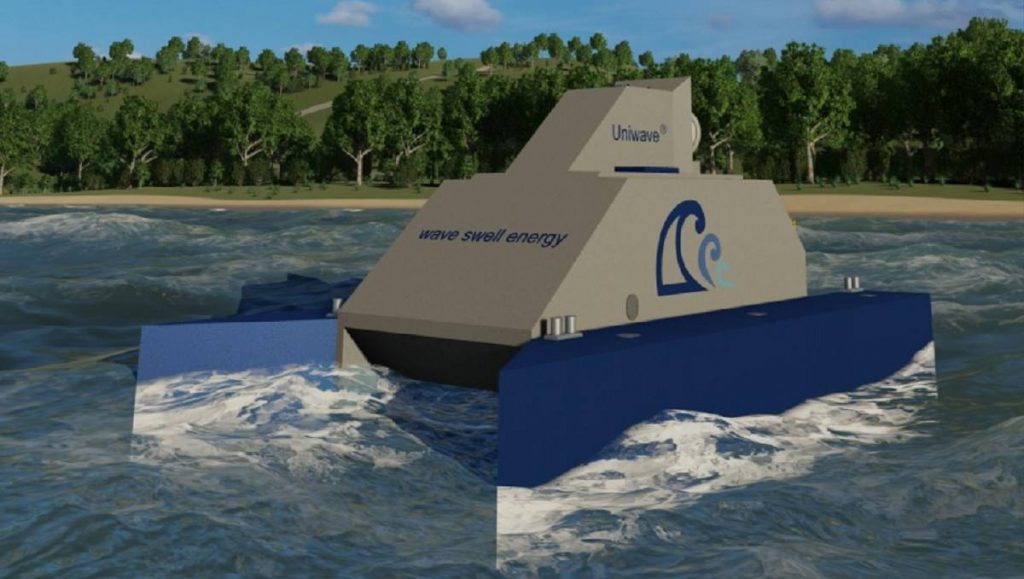 Sitting partially submerged on the seabed, the Uniwave 200 will use “oscillating water column” technology to push air into a chamber fitted with an electricity-generating turbine. The system functions like an artificial blowhole, using changes in air pressure to spin the turbine as waves force their way through an opening on one side of the device.

Wave Swell Energy CEO Dr Tom Denniss said he expects the project to be the first of many using their new way of generating electricity from the power of the ocean.

“Given the waves that wash upon our shores contain more than twice as much energy as the world currently uses, there is clearly a role for wave energy to play in the global energy mix,” Dr Denniss told ARENAWIRE.

Dennis said the system has been designed to capitalise on the predictable nature of waves.

“The Wave Swell technology, with no moving parts in the water at all, is perfectly placed to take advantage of the benefits wave energy has to offer, particularly in micro grids, where it can help to smooth out the delivery of power and displace the usage of diesel fuel for generation,” he said.

Wave energy is an obvious choice for King Island. Situated between Tasmania and Victoria in one of the most treacherous stretches of ocean on earth, massive swells propelled by the westerly ‘Roaring Forties’ winds build uninterrupted across the Indian and Southern Oceans and crash against the island’s shorelines.

In the 1800s these trade winds propelled ships transporting cargo around the world, and were responsible for many shipwrecks on King Island’s rugged coasts. Many of the 1700 residents that live on the island today trace their family lineage back to the ill-fated voyages.

Electricity produced by the new wave system will be fed into the King Island microgrid, which was built to provide a reliable and stable supply of renewable energy and reduce reliance on diesel generators. Supported by ARENA funding, the microgrid has allowed the island to source the majority of its electricity from the Huxley Hill Wind Farm and a 470 KW solar array.

While on average the microgrid currently supplies about 65 per cent of the island’s electricity, the system has managed to deliver stretches of several days at a time without the need for any diesel power. According to Hydro Tasmania, that is a world-record for a grid of its size.

The success of the project has been replicated at King Island’s Bass Strait neighbour, Flinders Island, using a similar hybrid system. Together, the projects have demonstrated how renewable energy and enabling technologies like batteries, dynamic resistors and flywheels can work together to provide stable, reliable power around the clock.

“Wave energy has the potential to be integrated into microgrids, particularly on island locations with limited space, to reduce the need for significant battery storage due to the relative predictability and consistency of wave energy,” Mr Miller said.

“The tidal and wave sector in Australia is still in the early demonstration phase. Wave Swell’s unique approach to wave energy will gain valuable knowledge and help to see whether this is a viable option for generating renewable energy.”

In an editorial, Tasmania’s Advocate newspaper said the ”new wave energy project under way on King Island further reinforces Tasmania as the renewable energy powerhouse of the nation.”

How does wave energy work? image

Clean energy, unrelenting and regular... Read more
Ocean energy
What is tidal energy and how does it work? image