Wires, weather and drones could hold the key to speeding up the energy transition and cutting electrification costs. 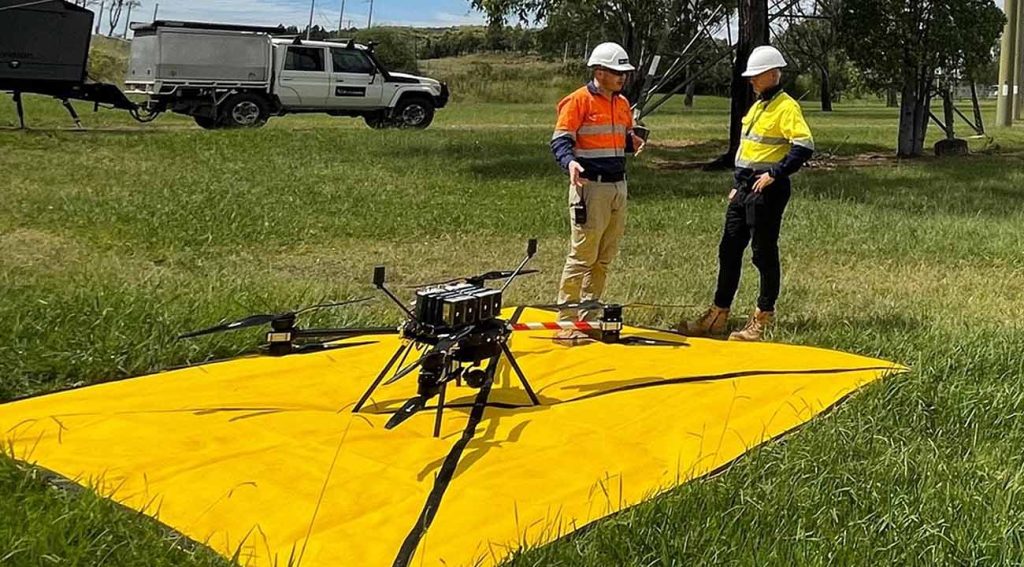 “The ARENA funding, along with Transgrid’s support is allowing us to create a grid-scale solution … which means that Australia is going to have some of the smartest infrastructure in the world.” Infravision co-founder Chris Cox

Wires, weather and drones could hold the key to cutting the cost of, and speeding the transition to renewable energy.

The wires in question are network transmission lines, the big overhead cables that carry electricity at upwards of 220 kV (almost 1000 times higher than the output of your wall socket) across large distances.

By 2050, Australia’s transmission networks will be carrying almost twice as much electricity as today. That’s because the energy transition will require almost all our energy needs to be supplied as electricity.

The capacity of transmission lines is partly dictated by the weather, namely wind and ambient heat. Add heat generated by current flowing down the line, and it’s possible to work out how much a line will stretch and sag in different conditions. More sag leaves the line hanging nearer to the ground, nearby vegetation and  structures.

Those ratings are calculated on conservative estimates of the worst operating conditions that could be reasonably anticipated.

Now, Australian company Infravision plans to provide real time measurements of all those variables. Armed with that information, network operators could safely increase the line’s power capacity when conditions are favourable.

If successful, the trial could scale up to supply data covering entire grids.

“This technology measures small changes on the electric system that allows us to ensure we don’t curtail renewables.” Transgrid Executive General Manager of Networks Marie Jordan.

Infravision will use drones to fly over and install sensors directly onto transmission lines.

The Next Generation Line Monitoring System measures what is known as microclimatic data. That information will allow operators to calculate a dynamic line rating (DLR) and, in turn, safely dispatch more electricity on the line when conditions are suitable.

ARENA is providing $732,493 to help Infravision develop, test and trial its hardware, and proprietary software to process the data.

If successful, the project could reduce system costs, defer the need for new lines and accelerate renewable energy’s penetration of power networks.

ARENA CEO Darren Miller said the dynamic line rating solution could help get the most out of existing transmission lines.

“Allowing an increased flow of electricity through existing assets reduces the need for new infrastructure, keeping down costs for consumers and network operators,” he said.

Why do we need more transmission lines?

“We know that we have to build more transmission lines, but we also have to make the best of what we have.” Assistant Minister for Climate Change and Energy Senator Jenny McAllister.

Discussions about renewable energy tend to focus on new technologies replacing old. For instance, solar power or big, wind turbine generators and batteries instead of synchronous coal or gas-fired generators.

But, quite possibly the simplest technology of them all gets less attention.

That conversation is rapidly changing because the transition to renewable energy will see our appliances, vehicles and industries switching to electricity on a massive scale. Even renewable hydrogen production will depend on electricity to power it.

Those cables now carry a huge amount of electrical energy, about 180 TWh (180,000,000,000 kWh), every year across the National Electricity Market (NEM). The NEM operates across all states and territories outside Western Australia and the Northern Territory. That adds up to the equivalent of around 8000 kW/h of electricity per person.

But we’re going to need even more.

The Australian Energy Market Operator (AEMO) expects that figure to almost double to 320 TWh by 2050. That means the NEM will need another 10,000km of transmission cable at a cost of around $12.8 billion.

AEMO has identified that even small reductions in those numbers can add up to big savings.

Infravision co-founders Cameron van der Berg and Chris Cox met by chance in a Townsville dive shop and realised they shared a passion for the environment and tackling climate change.

“Our vision is of a grid that doesn’t contribute to climate or environmental change. Our mission is to accelerate the transition to renewables as fast as possible,” he said.

At the recent Renewable Energy Founder Forum hosted by ARENA and Innovation Bay, Infravision took home the people’s choice award for its novel approach to hanging transmission lines with drones.

The TX System is a live-line stringing system that has, amongst other projects, repaired bushfire damaged lines in Australia. It replaces existing, manual and dangerous line stringing methods that use helicopters.

But the new line monitoring system is an expression of a greater ambition.

“We started by reducing risks to the workforce, and then we morphed into understanding that we could be doing more,” Mr Cox said.

“This is not just a trial to see if it works to increase capacity on the line. This funding is going to help us install this at grid-scale, which means Australia is going to have some of the smartest infrastructure in the world,” he said.

“Which means our renewable transition is going to be able to be accelerated at a rate the world has never seen.”

Infravision is now also working with US and Canadian power suppliers.

Can this Tassie wind farm provide grid-stability services? We’re going to find out

On the edge of a clifftop in Tasmania... Read more
System security and reliability
Australian renewables growing at record rates image