ARENA recently brought the Managing Director of Germany’s Energy Agency to Australia to share her knowledge with our energy industry, and deliver a keynote speech at the Insights forum. 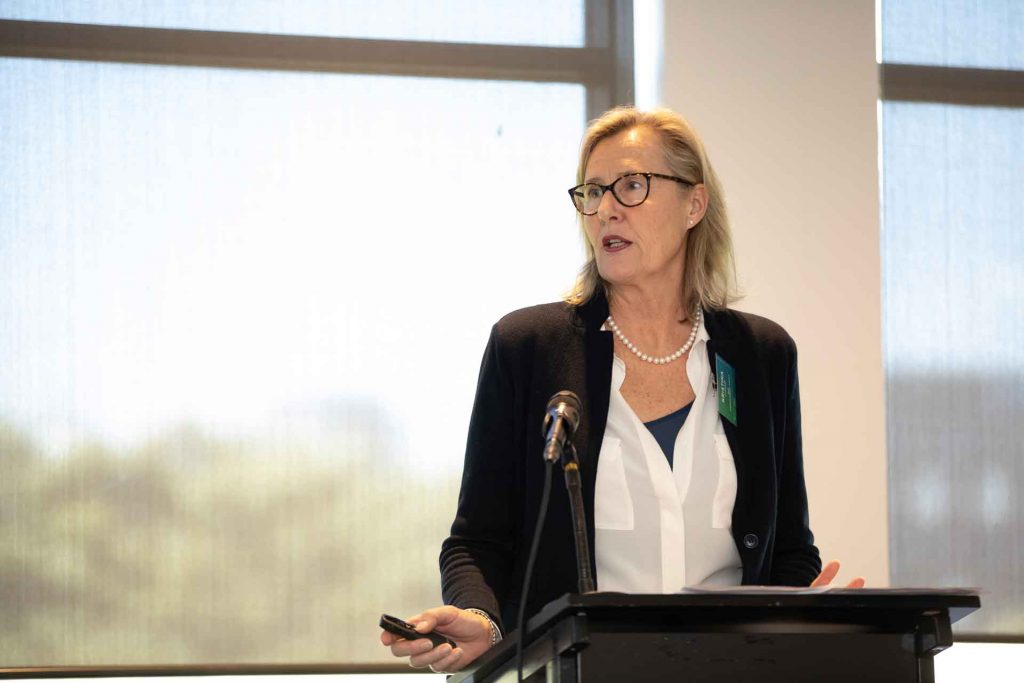 With responsibility for designing and implementing the German Government’s energy and climate policy targets, German energy leader Kristina Haverkamp’s Deutsche Energie-Agentur (dena) is working towards an energy transition that prioritises sustainability, security of supply and competitiveness.

The country is currently undergoing a major energy transition, or ‘Energiewende’ that includes shutting down its seven remaining nuclear reactors.

With a population of almost 83 million people occupying a landmass less than half the size of New South Wales, Australia and Germany differ in many ways, but face a lot of the same challenges.

While Germany has been a strong adopter of renewable energy, German energy leader Haverkamp says the journey to date hasn’t been smooth. After the fall of the Berlin Wall in 1989, progress was rapid. Strong gains were made within a decade as the country reunified and East Germany modernised.

And even with between 80 and 90 per cent of the German public supportive of the energy transition, strong ‘not in my backyard’ opposition to new wind, solar and even transmission infrastructure is making the delivery of new projects slow and expensive.

A one to one with the German energy leader

Haverkamp told the Insights forum that energy efficiency measures will play an important role in the transition, with the country working to halve energy consumption by 2050 based on a 2008 baseline. One positive development she identified is that industrial energy productivity has improved ‘considerably’ at a time when the German economy and industrial sectors are growing.

She believes green hydrogen will provide a pathway to decarbonise Germany’s industrial sector, which may not be possible to repower with renewable electricity. This is an opportunity reflected in Australia, where work is underway to translate our comparatively rich wind and solar resources to produce large quantities of green hydrogen for domestic use and export.

Emphasising the potential of ‘powerfuels’ like hydrogen and synthetic liquid fuels like kerosene to replace natural gas, Haverkamp believes they could bring down costs in the transition to renewable energy by utilising existing infrastructure, equipment and even buildings, rather than having to electrify everything immediately.

As well as providing energy for industry, these fuels could provide a way to transition the energy-hungry heating system to renewable energy, and allow for a gradual phasing in of lower emission sources of energy.

“It’s not a complete system switch, but you can take people along,” she told the forum.

She identifies powerfuels as a way to transition sectors that cannot be repowered with electricity in the short-term, like long-distance aviation. They can also be traded globally, providing an opportunity to diversify supplies for countries rely on energy imports. Haverkamp believes that producing more synthetic fuels from renewable resources would be beneficial for Germany, for example by reducing reliance on oil imported from Russia.

To get the energy transition back on a trajectory to achieve their emissions reduction goals, the German Government announced a new package of reforms in September.

READ MORE: ARENA SHARPENING ITS FOCUS AS IT TACKLES NEXT STEPS IN ENERGY TRANSITION

As part of the plan, support is being offered to projects that use waste to produce heat. Two-thirds of Germany’s industrial energy usage comes from process heat, so finding ways to reduce wastage and use renewable fuels is a priority. Haverkamp is excited by the opportunity to replace fossil fuel feedstocks with renewable alternatives, particularly hydrogen.

Another area of shared ground with Australia is the scale of the challenge of integrating renewable energy into the electricity network. Renewables currently supply about 40 per cent of Germany’s electricity needs, building to a national target of 65 per cent by 2030 and 95 per cent by 2050.

“We have decided to have most of our new high voltage DC transmission lines go underground to increase acceptability, though it makes it much more expensive… As new transmission lines are not always an option, we dedicate a lot of work raising the capacity of existing transmission lines,” German energy leader Haverkamp told the forum.

She cites the example of automated transmission lines that can adapt to the weather, electricity demand and bottlenecks in the system.

Germany currently exports up to about 10 per cent of its electricity generation, but Haverkamp expects that to tighten as existing coal and nuclear plants are replaced by renewables.

With a growing share of variable wind and solar power entering the system, Germany is looking to different technologies to increase flexibility in the system. These range from gas fired power plants to new large-scale battery storage, working with large energy consumers to manage variability in energy supplies with demand response, and aggregating decentralised loads such as home storage systems.

While Germany’s transition to renewable energy is more advanced than Australia’s, Haverkamp isn’t underestimating the scale of the challenge ahead – particularly decarbonising transport and industry. And despite our differences, there are clearly opportunities to learn lessons to learn from the technical and social transitions underway in both countries.

In a sign of the times, oil and gas g... Read more
Renewables for industry
Alcoa aluminium producer to trial renewable energy image

Manufacturers are being supported to ... Read more
Renewables for industry
View all related stories
Follow Us
Back to top