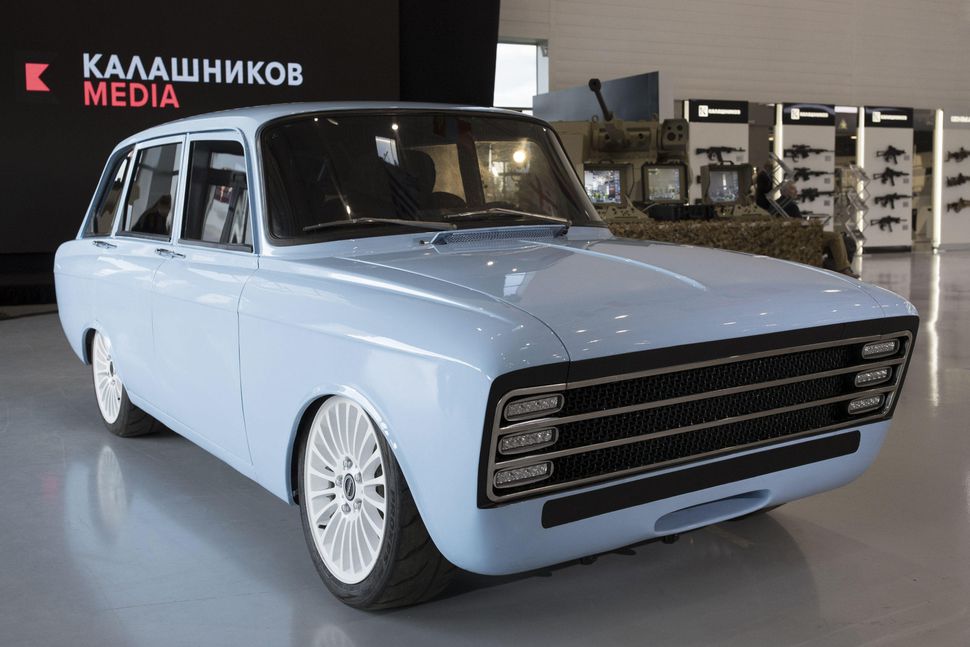 The new CV-1 concept’s retro lines are inspired by the Soviet IZh 2125 Kombi – a rugged hatchback launched in the 1970s that became popular for its durability and versatility.

On paper, Tesla have little to fear from the Russian’s self-described ‘electric supercar’. With a range of 350kms and 0-100kmh time in excess of six seconds, Kalashnikov’s CV-1 won’t threaten Tesla’s current offerings for performance or range.

Russian media have reported Kalashnikov’s press office saying, “This technology will let us stand in the ranks of global electric car producers such as Tesla and be their competitor.”

“We were inspired by the experience of global market leaders in developing our concept.”

In recent days Jaguar have released their E-type Zero – a modern take on their 1960s icon which set speed records and brought technological innovations into the mainstream.

These days under the ownership of Indian-owned multinational Tata, Jaguar have described the plug-in E-type as “The most beautiful electric car in the world.”

With a top speed of 153mph, the original straight-six powered E-type became the fastest production car on the road when released in 1961. The new electric models will have a comparable top speed but accelerate even faster, racing from 0-100kmh in 5.5 seconds with a range of 275km.

A converted silver blue model hit headlines at the Royal Wedding of Prince Harry and Meghan Markle, after ferrying the newly married couple from their reception at Windsor Castle to Frogmore House.

Jaguar will build the new all-electric E-types at their Classic Works factory in Coventry in England’s West Midlands, not far from the site of their Browns Lane production line which operated from 1951 until 2005.

While hand-built vehicles like the E-type command boutique prices, a recent Energeia report found that there are affordable plug-in options on the horizon. The ARENA-funded research predicts that electric vehicles will not only be able to compete with internal combustion cars on range within a decade, but also price.

This levelling of the playing field is expected to accelerate Australia’s uptake of EVs, which have been slow to take off compared to other developed countries. Energeia predict that within two decades electric cars will take over our new car market.