As trucks rumble along and disgorge their unwanted cargo into a giant pit, Hansons Landfill in Wollert looks like any other version of exactly what it is: a suburban rubbish tip. 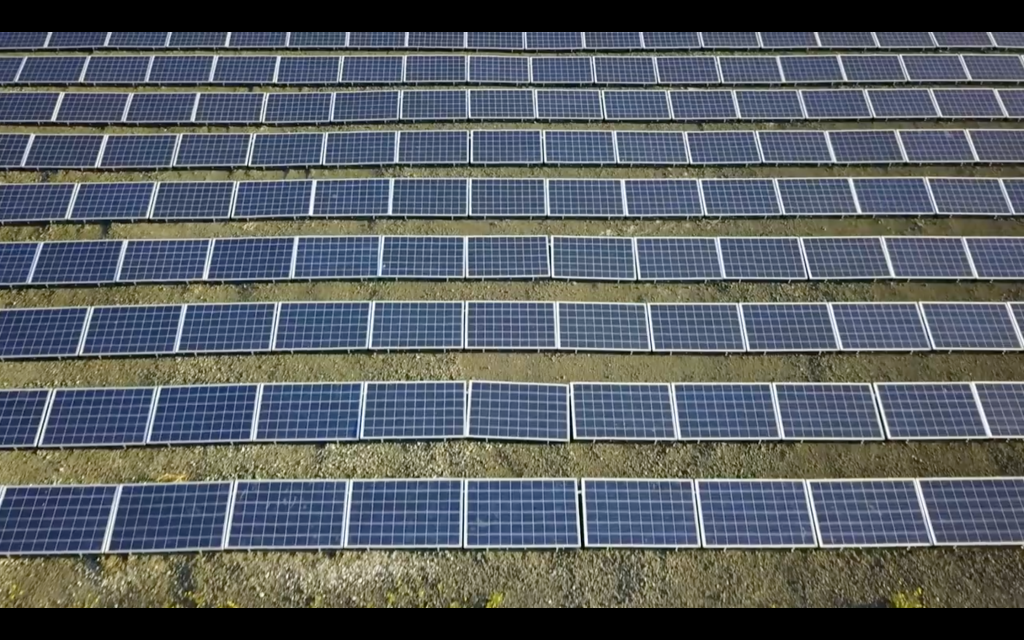 But just metres away, a more surprising sight awaits. Row upon row of gleaming solar panels, resting upon a lushly-grassed hill. High tech, clean and 100 per cent renewable.

The great Aussie tip has come a long way.

Australians are throwing out ever-increasing amounts of rubbish. As a nation, we produced 50 million tonnes of waste last year. Much of that ends up in landfill sites across the nation, but finding uses for such sites once they are filled is a challenge.

Tonnes of waste are deposited into giant holes, covered over and capped by a mixture of clay and a special membrane. As rubbish settles and breaks down, the resulting land is far too unstable and shifting to build upon, which seriously limits the uses it can be put to.

An Australian-first project at the Wollert rubbish tip is trialling a new method for installing solar panels. The aim? To create a footing and a way of fixing the panels to it that allows what would otherwise be unused land to become home to a solar farm.

“Landfill areas are very difficult to use for other purposes once they’ve been covered over,” says Jason Dockerill from Joule Energy, which has brought the project to life, with $100,000 in funding from ARENA.

“The settlement issues are just too much. If you try to build on top of it you can get uneven subsidence. You are building on waste. As it decomposes, whatever you build will just drop.”

Such sites are typically refashioned into parks or other green space and there’s nothing wrong with that. But adding the ability to locate a solar farm in suburban environments where vacant land is not always plentiful is an idea with serious potential.

The solar farm helps to power a facility that is not so much a hole in the ground as a technological marvel. A power station on-site produces electricity from the landfill gas emitted as the rubbish decomposes and feeds electricity back into the grid.

The solar panels are helping to power the parasitic load of the landfill gas fired station, which allows it to export more renewable electricity into the grid.

Hansons, a former quarry, caters for commercial waste but is also a final resting place for what’s termed “kerbside waste”, the trash collected each week from tens of thousands of homes around Melbourne. As consumers begin to take more interest in what happens to their rubbish and the environmental footprint their behaviour leaves, attempts to create clean energy in such places represent a new front in the war on waste.

“With a bit of creativity a site like this can really be turned into a renewable energy hub,” Jason Dockerill says. “We see a lot of potential here.”

Landfill sites are generally divided into “cells”. As each cell is progressively filled it is covered over and “capped” by a top layer that is approximately a metre deep.

THE WOLLERT RUBBISH TIP – HOW IT WILL WORK

The project is trialling three different methods for installing footings to house solar panels on the unstable cap. One method involves “micro piling” (driving small piles into the ground) while the other two are variations of above-ground methods using concrete and aggregate as ballast to hold it in place.

More than 380 solar panels, able to generate 100 KW were installed in late 2016. A final report will soon be completed outlining which method has been most successful but preliminary results are extremely encouraging.

This is the first project of its kind in Australia — there are a couple in the United States attempting a similar feat. It’s an excellent example of the kind of thinking ARENA encourages, using the power of good ideas to encourage the spread of renewable energy.

Harry Taylor, who is manager of the landfill says it has attracted plenty of attention from visitors to the dump.

“I think it’s a good thing,” he says. “Landfilling is a fine economical way of disposing of waste when things are well managed … but it’s very difficult to build on. A solar farm on landfill is a fine idea.”

He says there has previously been interest shown from companies in building a larger solar array on the land and thinks the success of this trial could unlock a bigger solar farm in the future. With another 70 years of service remaining the landfill will be producing plenty more capped land.

“We are interested. Once the land is capped and revegetated that land becomes available for a solar array,” he says. “That’s a very interesting possibility.”

A quiet evolution: It’s not so quiet any more image

A quiet evolution: It’s not so quiet any more

As we look back at 10 years since ARE... Read more
Solar PV R&D
Commercial tenants stand to save with Solpod’s relocatable solar system image

With the power to slash power bills a... Read more
Solar PV R&D
How Aussie solar could power a new space race image

Picture a world where satellites and ... Read more
Solar PV R&D
View all related stories
Follow Us
Back to top