An agreement has been signed to scope the potential of exporting Australian hydrogen to Europe. 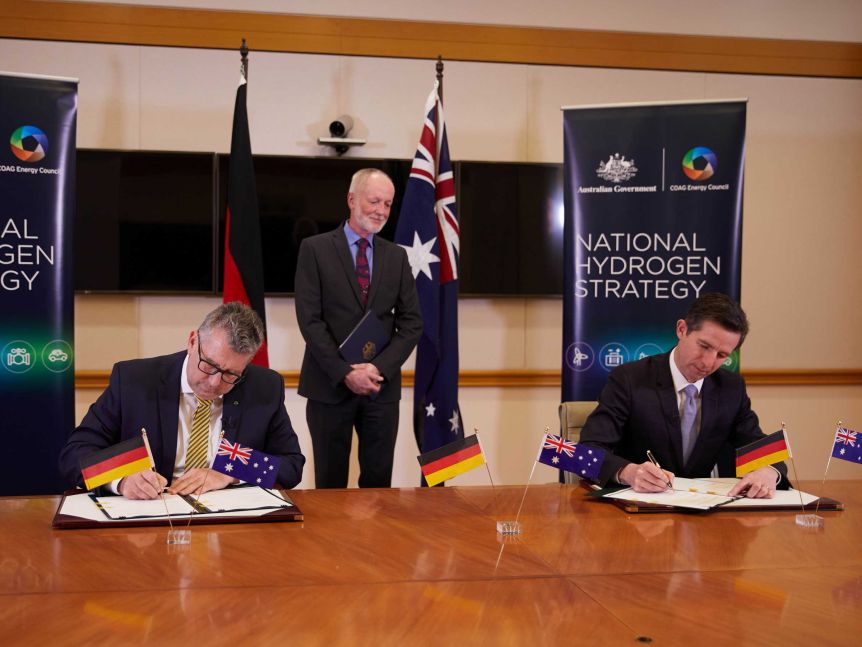 His Excellency Dr Thomas Fitschen, Ambassador of Germany, witnesses Australian ministers Birmingham and Pitt signing the declaration of intent to assess the feasibility of developing a hydrogen supply chain.

Australian hydrogen could help Germany to decarbonise its energy supplies after the two governments agreed to assess the feasibility of developing a hydrogen supply chain.

The proposal could offer a pathway for Germany to achieve its emissions reduction target by 55 per cent on 1990 levels by 2030, as part of a longer term goal of net zero emissions by 2050.

With limited renewable energy resources and the largest electricity use in Europe, Germany has its work cut out achieving the emission reductions goals, so is looking for ways to import renewable energy.

LISTEN: THE HEAD OF THE GERMAN ENERGY AGENCY DENA EXPLAINS THE APPEAL OF HYDROGEN

Hydrogen is an emerging prospect, releasing no emissions when produced with renewables and able to be transported around the world in purpose built carriers.

Under the scenario, plentiful low-cost electricity from wind and solar farms would be used to power hydrogen electrolysers, with the emissions free hydrogen shipped around the world to countries that today rely on gas and coal imports.

Australia’s role as a gas exporter positions us well amongst the field of possible hydrogen producers, thanks to established supply chains and trading partnerships with energy importing nations, infrastructure and no shortage of gas expertise.

Given it is impossible to tell how a unit of hydrogen has been produced, the National Hydrogen Working Group proposed a certification scheme with a guarantee of origin so buyers can be confident that hydrogen complies with local environmental and corporate commitments.

Tech on the table

Collectively these projects will show practical applications for hydrogen as a carrier of renewable energy, and help to bring down the costs of the technology needed to produce, transport and consume it in domestic and industrial applications.

Hydrogen technology is one of the priority technologies outlined in the government’s inaugural Low Emissions Technology Statement released last week, which will be delivered with support from ARENA.

Announcing the agreement with Germany, Trade Minister Simon Birmingham said partnerships like this will be critical to developing Australia’s future as a powerhouse in clean energy exporter.

“This study gets the ball rolling on the development of future hydrogen supply chain with Germany which could lead to billions of dollars in export earnings for Australia and help them meet their future clean energy ambitions,” he said.

Minister for Energy and Emissions Reduction Angus Taylor said, “Australia’s future hydrogen industry has the potential to generate 7,600 new jobs by 2050, many in regional Australia, with exports estimated to be worth around $11 billion a year in additional GDP.”

The trucks will run on hydrogen from ... Read more
Hydrogen energy
Biodiesel and bitumen to be made from wood waste image

The Australian and German Governments... Read more
Hydrogen energy
View all related stories
Follow Us
Back to top