The transition to renewable energy faces many challenges, including the growth of subtle yet profound factors that require an overhaul of national standards and regulations. 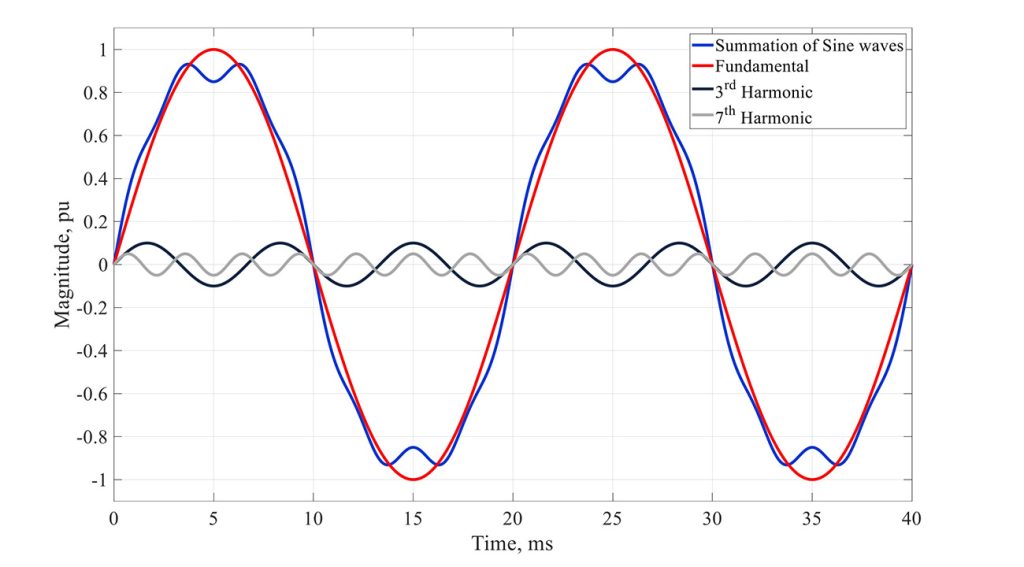 For a start, there’s so much. Renewable energy sources contributed 29 per cent of Australia’s total electricity generation in 2021. During the day, it’s now not unusual for renewables to contribute more than 50 per cent of national power.

But both wind and solar face a complex and technical challenge known as harmonic distortion.

The standard AC frequency in Australia is 50Hz, or 50 cycles per second. For maximum efficiency and minimum risk to the grid, that AC supply must be smooth with as little distortion as possible.

But inverters connecting solar and wind generators to the grid can, by their nature, produce a distorted AC waveform. That distortion produces harmonics, or multiples of the AC frequency at 100Hz, 150Hz and so on.

You can think of harmonics as ascending octaves of a base musical note. And staying with the analogy, distortion introduced by inverters is just like the tiny steps introduced into music when it passes through a digital process. It’s no longer smooth.

Audiophiles say they can hear that digital distortion. It’s annoying, and equipment manufacturers use filters to reduce the harmonics. But in an electricity power network, those distortions are not annoying, they are potentially dangerous.

Harmonics can damage network equipment, accelerate ageing of insulation materials and increase inefficiencies in power transmission. In some cases, harmonics may cause catastrophic equipment failures.

As with music, it is possible to install expensive filters at the output of the inverters to limit harmonics.

But a 2022, ARENA-supported University of Wollongong study found a new approach might be needed.

National Service Providers (NSPs) must already maintain national standards on the presence of harmonics. To do that, NSPs impose limits on harmonics levels at the source, that is at a generator or a load. That level is known as an emissions allocation, and it’s up to the load or generator operator to comply.

It’s a complex methodology, conservative in its allocations and risks overinvestment in expensive harmonic filters.

Now, with the surge in renewable energy generators, the problem has become even more complex and more urgent.

It is proving difficult to measure compliance with emissions allocation using current standard methods. So, in the absence of a nationally accepted alternative, different NSPs across the country have evolved their own methods of measuring and regulating harmonics.

To bring them together, NSPs need new national standards, new robust methods of measurement and a new regulatory framework.

A University of Wollongong study, part funded with $1.04 million form ARENA, is designed to do just that.

Over 29 months, the $2.28 million study will focus on issues associated with harmonic emissions compliance. Its results from an interim best practice guideline for voluntary use by participating industry stakeholders

“The University of Wollongong is tackling a very important project in harmonics that has the potential to benefit our energy transition by reducing the grid connection costs associated with renewable energy generation,” he said.

“This will help ensure secure and reliable grid operation at high levels of renewables penetration.

“With close collaboration from stakeholders involved, this project could help reduce the requirements for costly harmonic mitigation, reduce the number of abandoned renewable energy projects, and shorten the time frame for the grid connection process,” Mr Miller said.

Australian Power Quality and Reliability Centre Director, Associate Professor Duane Robinson said: “As an industry facing research centre, we expect the outcomes of this very practical work to provide clarity with respect to the methodologies for compliance assessment for harmonic distortion leading to less complex connection processes and even more renewable energy in our power system.”

Cheap energy from wind and solar is t... Read more
Renewables for industry
Australian businesses are making one big mistake when it comes to renewable energy. image

If there was any doubt that the Austr... Read more
Renewables for industry
Solar power in India: what a lightbulb moment image

There aren’t many people who co... Read more
Renewables for industry
Thermal energy: Can MGA fill a battery gap? image

A novel approach to utilising latent ... Read more
Renewables for industry
View all related stories
Follow Us
Back to top