This Final Report provides the findings of the study which concludes that some of the existing practices for managing harmonic distortion within electricity supply networks are leading to inefficient harmonic emission limit allocation. 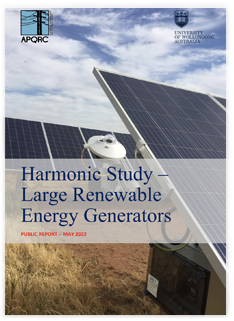 Harmonic distortion is periodic (repetitive) variation to the shape of the nominally sinusoidal 50 Hz electricity supply waveform. The mathematical Fourier series theorem states that any waveform can be represented as the summation of a number of sine or cosine waveforms. In the case of a waveform with harmonic distortion, the waveform can be represented by a fundamental component in addition to a number of other waveforms whose frequencies are multiples of the fundamental frequency. For example, the third harmonic has a frequency of 150 Hz or three times the fundamental frequency of 50 Hz. A major source of harmonic distortion of voltage waveforms in the electricity supply is the interaction between harmonic currents emitted by non-linear loads or generators and the electricity supply network impedance. Inverters used by renewable energy generators such as solar farms and some wind farms are non-linear devices and will intrinsically produce some level of harmonic distortion. Harmonic distortion is undesirable as it increases losses within the power system and customer installations and can interfere with the proper operation of some equipment. It also leads to increased ageing of insulation and in some cases may cause catastrophic failure of some components. As a general principle, Network Service Providers (NSPs) are responsible for managing harmonic voltage distortion within bounds that ensure safe and reliable operation of equipment connected to electricity supply networks. One of the methods used by NSPs to manage voltage distortion is to allocate emission limits to large customers (loads and/or generators). Under this management philosophy it is then the responsibility of the customer (load or generator) to ensure that their plant does not exceed the allocated emission limit.