A promising new way of generating electricity from the ocean is being trialled in Bass Strait. 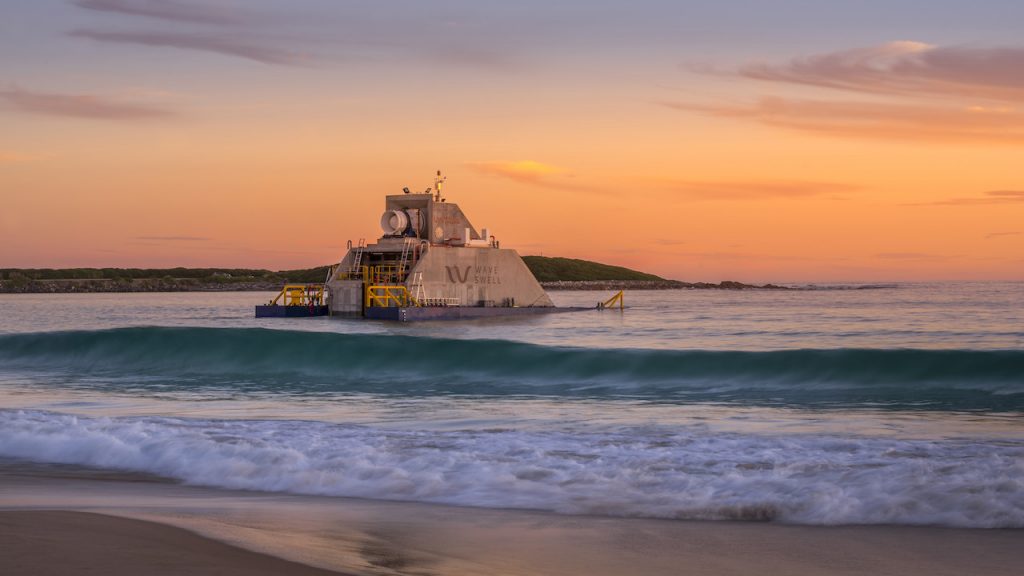 King Island will soon be powered by a combination of wind, solar, battery and ocean power, with the new Uni Wave200 in place and ready to be connected to the island’s microgrid.

The deployment is part of an ARENA-supported trial first announced in 2019, building on a 2011 project which established a hybrid microgrid that supplies more than two thirds of the island’s energy needs through a combination of wind, solar and batteries.

Delivering the unit to an island surrounded by ocean prone to large swells and wild weather was a major undertaking. The Uni Wave’s substructure had to be towed down Tasmania’s Tamar River to the Port of Bell Bay where construction was completed, before setting out on the marathon 40 hour crossing to King Island.

The device now sits partially submerged on the seabed at Grassy Bay, where the movement of waves will force air through a turbine to generate electricity.

The company’s co-founder and executive director Tom Dennis, who is also an oceanographer, told ARENA that their design has been informed by consultations with the world’s leading wave energy experts.

“Right at the beginning of this project years ago, we did a major survey of the various experts in the world who had experience with wave energy and asked them for their views on the lessons that should be learnt and we need to address… we’ve incorporated all of that to as great of an extent as possible ensure we don’t make the same sorts of errors of the past,” Dennis explained.

The work has culminated in the system deployed at King Island, which is able to supply up to 200 kW of power to the microgrid around the clock, complementing the wind and solar power already installed and reducing reliance on the island’s diesel generators. Wave Swell believes future commercial scale units will likely have a capacity of around 1 MW, but could reach as large as 3 MW.

Their first unit was assembled in Tasmania, but the company sees potential to assemble the Uni Wave around the world at hubs close to the places where they will be deployed to minimise transport costs.

ARENA contributed $4 million towards the $12.3 million trial, which will supply power for the island through a power purchase agreement with Hydro Tasmania. The funding was provided under ARENA’s focus on integrating renewable energy into the electricity system, which is helping to achieve the technological advances and innovations that are key to many scenarios in the transition to a low emissions economy.

Dennis is confident that the technology will compete in time with wind and solar on cost, but has the added advantage of being more predictable and consistent.

He sees four clear benefits in their design over other wave energy conversion systems, which have struggled to produce power reliably at a cost that can compete with other renewable energy technologies.

Unlike other wave generators that capture energy from the sea floor, surface, or somewhere in between, the Uni Wave is capable of capturing all the energy throughout the water column, from surface to seabed. This improves the device’s conversion efficiency, which reduces the cost of energy produced.

Being situated in the shallows also provides comparative ease of access, aiding maintenance which flows through to improved reliability.

By not having any moving parts in the water, Wave Swell’s design is also better able to withstand the harsh marine environment, which has historically proven a major challenge for wave power technologies.

They also see an opportunity for the structure to shield coastlines from erosion caused by waves, taking “the destructive energy in waves and converting it into constructive electricity”.

Tom Dennis on the arrival of the Uni Wave200 at King Island: “The feeling was amazing. Everything went smoothly – the result of years of hard work and planning”

According to Dennis, designing a device that can survive in saltwater is the greatest challenge for wave power developers, but he is confident that Wave Swell’s commercial scale units will have a 20 year lifespan.

They will trial the Uni Wave200 unit at King Island for at least 12 months, with commissioning on track to be completed in March. At the end of the trial the device will be refloated for removal – a process which has already been tested and will leave the seabed unharmed.

It might look like something out of a... Read more
Ocean energy
How does wave energy work? image