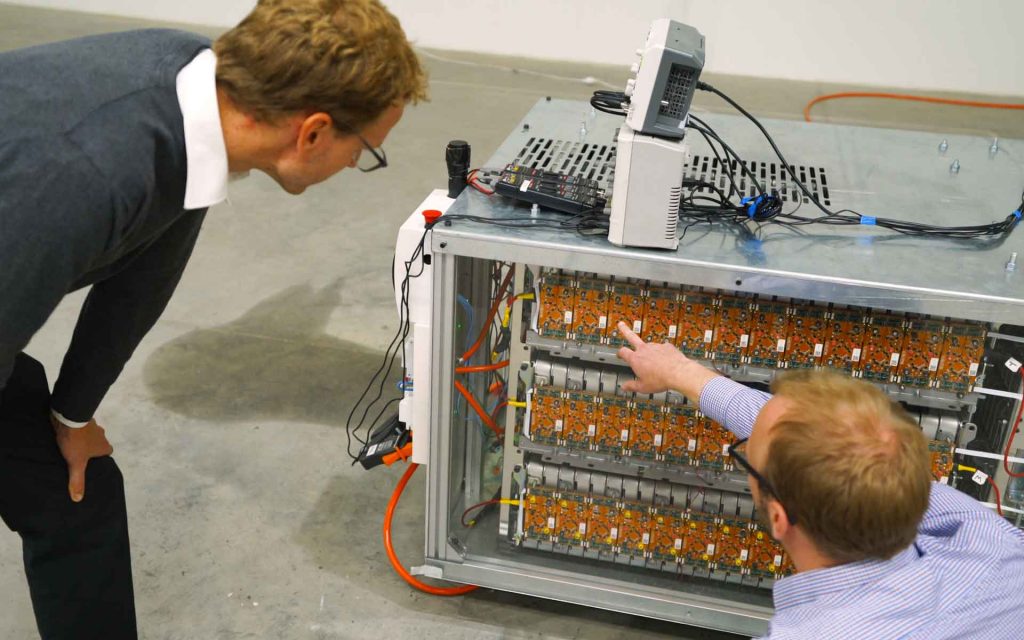 As well as providing control over individual cells within a battery pack, the system can provide a steady supply of energy without the need for a stand alone inverter.

The benefits are significant. As well as improving the life of lithium-ion batteries by a third, the streamlined system allows Relectrify to market their storage for half the price of the existing market leaders.

With more than five million customers across eleven states, utility AEP hopes the technology can provide a cost effective way to provide storage at both a grid and residential scale.

AEP Vice President of Innovation and Technology Ram Sastry said their residential, industrial and commercial customers are looking for ways to improve the reliability and resilience of the grid, as well as their homes and businesses.

“The costs of new grid-scale batteries are trending downward and their performance is improving for these applications, but big, expensive inverters are still needed in these systems,” Mr Sastry said.

“We are participating in this pilot with Relectrify and Nissan North America to see if it is possible to maintain the same performance at a low cost without the external inverter. We’re hoping that this innovation combined with many, repurposed battery packs from the national electric vehicle fleet will be an economical solution for us and our customers.”

On the electric vehicle front, Nissan says they joined the project to ensure that their batteries live on once they reach the end of their useful life in an EV. This is important as electric vehicle batteries need to be replaced once they drop below 80 per cent efficiency.

This usually takes between five and ten years, but Relectrify’s breakthroughs offer an opportunity for these batteries to live on, potentially powering homes, businesses or even the grid for as many as 2500 more cycles.

Relectrify co-founder and CEO Valentin Muenzel said the company was progressing on its mission to make energy storage affordable.

“The interest Relectrify is receiving from customers and partners has greatly exceeded our expectations. We are now working to discuss with, and select, the most promising battery manufacturers, distributors and integrators globally with whom to co-launch products into promising storage applications across different geographies,” Dr Valentin Muenzel said.

In 2018 ARENA provided funding for Relectrify to develop the newly-launched hybrid inverter.

“With the BMS+Inverter, developed over years of first-principles work by our team, Relectrify is now at the global forefront of battery cost-competitiveness and within striking distance of the US$100/kWh inverter-integrated pack cost widely viewed as the holy grail of battery storage,”.

The company has come a long way since Muenzel moved to Melbourne from Germany to complete his PhD in 2012.

“Relectrify formed through a back-and-forth discussion with my co-founder Dan [Daniel Crowley] on how blue-sky technology ideas from my PhD could enable lower cost batteries,” he said.

In 2017 they received $750,000 from the Clean Energy Innovation Fund, a partnership between ARENA and the CEFC. ARENA originated this transaction and the money was used to bring their second-life battery technology to the market.

READ OUR FIRST BLOG ABOUT THE RELECTRIFY BATTERY TECHNOLOGY

“Relectrify’s technology controls series cells individually, getting the most out of each rather than being limited by the single weakest one. Surprisingly and counterintuitively, instead of the typical tradeoff between better control and lower cost, in this case, electronics with more control can actually be built at less cost.”

“The volume of batteries available from electric cars for repurposing is set to grow more than 20-fold in the next 10 years and represents a tremendous opportunity for affordable storage.

He says that interest is also growing in Relectrify’s control system for new battery applications, both to reduce costs and increase battery life.

“Our Melbourne-based team has created a very different technology approach to battery management and inverters… ARENA’s support was a key enabler for Relectrify to develop technology that is world-leading.”

ARENA CEO Darren Miller welcomed the new inverter technology, saying that it will help to recycle electric batteries as they reach the end of their functional life in the expanding global fleet.

“As well as extracting the best performance from new batteries, Relectrify’s system will give electric vehicle batteries a second life.” Mr Miller said.

“This will help to reduce waste and make battery storage economic. It’s a win-win for everybody and ARENA is proud to have helped them make it this far,” he said.