Creative ways of storing energy from the wind and sun will be needed to power the next phase of the energy transition. 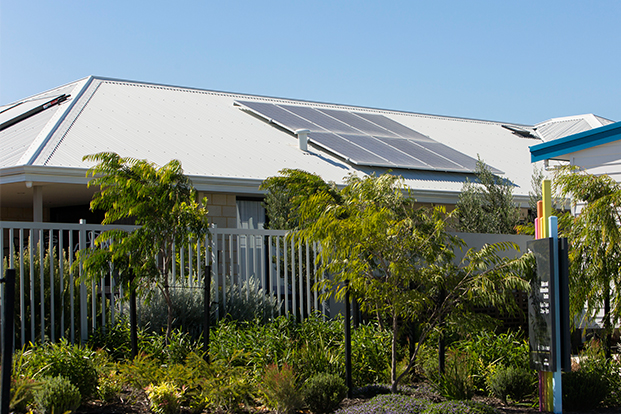 This week on ARENA’s podcast Rewired, we speak to Dr Marnie Shaw from the Australian National University about a new wave of community energy projects.

Unlike the small household batteries that are installed behind the meter to soak up rooftop solar power, community batteries can be installed across the distribution network to benefit all households.

The batteries can be charged from rooftop solar exports during sunny periods, helping to reduce the impact of gluts of electricity and allowing all electricity customers to benefit from lower bills and a larger share of renewable energy.

The equity of the electricity system is a growing concern, with the gap widening between households that can afford to buy solar, batteries, electric vehicles and other customer-owned assets that deliver significant savings over time, and those that cannot.

Abundant, low cost solar and wind power is helping to reduce energy prices, but that renewable electricity is inherently variable.

Providing a steady, dependable supply of electricity day and night requires a lot of storage, which is being delivered in a number of ways.

At a grid scale, pumped hydro energy storage projects like Snowy 2.0 will act like a giant battery by pumping water uphill to elevated reservoirs when electricity demand and prices are low, then releasing it to produce electricity when demand rises.

Once complete, Snowy 2.0 will be able to store 2,000 MW of capacity for up to 175 hours, without the need to replenish the elevated water storages.

The massive pumped hydro projects like Snowy 2.0 and Genex Kidston in Queensland under development will be paired with grid scale batteries like the Hornsdale Power Reserve that has a capacity of 150 MW / 194 MWh. That’s roughly enough power to run 30,000 homes for eight hours, while also delivering grid services that help to smooth the supply of electricity and reduce power bills. But it still won’t be enough.

“We need to hugely increase the amount of energy storage that we have integrated into the grid.”

AEMO predicts that 45 GW / 620 GWh (45,000 MW, 620,000 MWh) of energy storage will be needed by 2050, saying “batteries, hydro or viable alternative storage of up to eight hours’ depth to manage daily variations in the fast-growing solar and wind output.”

Dr Shaw explains that community scale energy storage could have a big impact on the way the network operates, bridging the gap between existing household and grid sized batteries.

She expects that most would be sized in the range from “tens to hundreds of kilowatts in size” and be located in public spaces around our neighborhoods.

“They look like something like a small shipping container, that will sit in some green space in your suburb.”

United Energy is currently trialing one approach to community energy storage in Melbourne’s bayside suburbs, installing 40 small batteries up power poles on suburban streets. The batteries aim to charge during the day from solar exports to help manage the evening spike in demand for electricity.

If successful, this project could provide a blueprint for networks to follow in areas of the network with large numbers of rooftop solar installations, where distribution networks are stretched by large amounts of energy flowing into the grid during sunny periods.

Community battery projects like this also provide more control for networks than behind-the-meter battery systems, which can contribute to the broader grid through virtual power plants, but typically prioritise the needs of individual households over the grid.

“Household batteries, they’re sort of an option for people who have their own house, who can afford that upfront cost.”

How much solar energy are Australians using? image

How to reduce your home electricity bill

Energy knowledge is power for consumers and industry

Information about how each of your ap... Read more
Distributed energy resources
View all related stories
Follow Us
Back to top