This report details the journey towards the implementation of Virtual Machine Mode (VMM) at Hornsdale Power Reserve and focuses on the testing, modelling and pilot trials undertaken to demonstrate the functionality of the VMM and validate the model for the full-scale connection alteration studies. 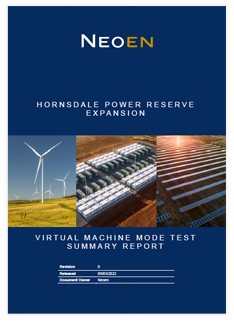 Carrying on the success of HPR, Neoen, in partnership with Tesla, this project received funding from ARENA as part of ARENA’s Advancing Renewables Program, and the South Australian Government’s Department of Energy and Mining (DEM) to expand the existing 100MW/129MWh HPR by a further 50MW/64.5MWh. The South Australian Government provided support to the project by committing $15 Million AUD over 5 years through its Grid Scale Storage Fund and ARENA committed $8 Million AUD in grant funding through its Advancing Renewables Program.