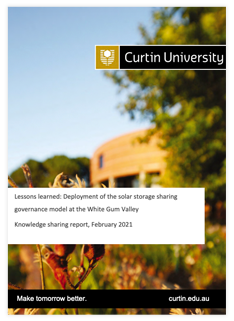 Three residential apartment buildings of varying size were fitted out with a shared centralised battery and rooftop solar PV system providing electricity behind the meter (BTM), with a single grid connection as a back-up. In line with the final delivery milestone, this report provides an overview and review of the following:

The first section details the governance models (resident owned, shared ownership and third-party ownership) and the system information, for three different strata lot developments. The models have been examined for the shared benefits, risks and costs between developers, owners, tenants, strata bodies and utilities. They have included the energy system design, billing, legal addendums for dwelling purchasers and dwelling leases. The financial aspects of the governance models have been studied, tested and demonstrated for each development. This included project costs which have been compared, examined and entered into a financial model assessing Net Present Value (NPV), Internal Rate of Return (IRR) and savings/avoided costs. Given the timing of the project (the technology of integrated battery/solar only became commercially viable from 2016 onwards), and after deducting the grant funding at the capital raising stage, these projects have been mildly good investments. However, the learnings have provided valuable insights into the widespread deployment of these systems.

Secondly, the report documents the interaction between the governance model and the strata management firms. The legal vehicle used to deploy these systems was the Strata Titles Act, which facilitates the shared ownership of the common solar/battery assets. The governance model relies on the strata management company to execute it as designed. There was some resistance from the strata management companies involved as the business as usual (BAU) approach for managing electricity in these types of development is through application of individual billing at the residential tariff (via sub-metering of each apartment), despite bulk electricity being purchased at a reduced rate.