Concentrating solar thermal (CST) power plants involving a solar array (field of mirrors), central receiver (known as a power tower) and storage technologies have strong potential to reduce the cost of solar energy to levels comparable with wind-generated energy (around $100 per megawatt hour). Various design strategies are being trialled in the US, Europe and elsewhere to achieve this.

A report on the Vast Solar 1U Validation and Performance Modelling for 1.2MWth Solar Array with High Temperature Receiver and Integrated Thermal Storage 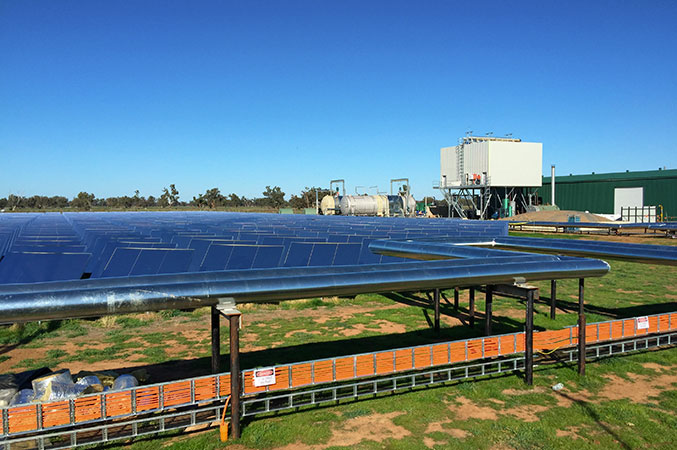 This pilot scale demonstration is a critical step in proving the Vast Solar low-cost CST system and readying the technology for commercial scale deployment and, ultimately, full commercialisation.

In Australia, Vast Solar has developed innovative designs for high efficiency/low cost components that can be used in solar thermal central receiver power plants with integrated energy storage. These components have already been tested individually and as an integrated system.

This project helped Vast Solar’s innovations move to the next level by confirming the accuracy of computer modelling used to predict the performance of Vast Solar’s CST system.

Building on an existing testing and demonstration facility in NSW comprising 200 mirrors, the project involved Vast Solar undertaking the following:

Data was collected on the expected energy generation and reliability of the system, in anticipation of a scale-up to full commercialisation of the technology.

The information was used to refine plant controls, enhance economic modelling and improve the design of the components and the computer modelling tools used to predict system performance.

This project provided Vast Solar with data on system performance for use in the continued development and commercialisation of CST technology that will break the $100 per megawatt hour barrier.