This report discuses the final phase in the optimisation of a second-generation yeast biocatalyst that significantly improves the economics and sustainability of bioethanol fuel for transport and other applications. 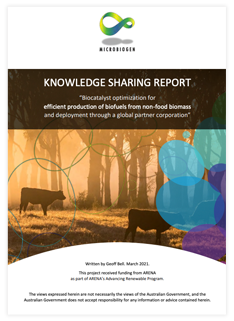 Transitioning to renewables is a critical step in the world-wide effort to reduce carbon emissions and build a sustainable future. To combat the worst of the effects of climate change, however, policymakers, businesses and individuals around the world will need to employ all the renewable technologies at our disposal simultaneously. Such technologies include solar, wind, hydrogen, biomass and various biofuels, in particular bioethanol.

Herein, MicroBioGen reports that, after more than 15 years and A$25M in spending, including A$8M in 3.5 years with ARENA funding, we have successfully completed the final phase in our optimisation of a second-generation yeast biocatalyst that significantly improves the economics and sustainability of bioethanol fuel for transport and other applications. It means that, for the first time, a single biocatalyst can be used to manufacture both fuel and food from non-food biomass. It also means that, if the CO2 generated from ethanol fermentation were sequestered, then biofuels would replace fossil fuels, add to the food supply and, the more biofuels produced, the more CO2 would be taken out of the atmosphere. Ultimately, the optimised biocatalyst places biofuels where it can make some of the greatest contributions to fuel and food security and the reduction of CO2 in the atmosphere.