This is the final Knowledge Sharing Report for the Development of Novel Hydrogen Trapping Techniques project. 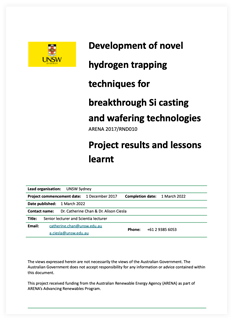 With silicon still a dominant cost of making solar cells, the focus of this project has been to develop new techniques to heal defects that exist in low-cost silicon wafer types. New cheaper wafer sources such as cast quasi-mono silicon (QM-Si) also known as cast-mono silicon, and small-grain mc-Si wafers offer the potential for significantly reduced solar cell cost as well as a lower carbon footprint, but generally have lower performance due to these defects that form during the silicon growth.

Previously, testing typical advanced hydrogenation processes on such wafers was shown to be ineffective at healing these grown-in defects, likely due to the rapid dispersion of hydrogen throughout all the silicon. This project focuses on newly patented methods of controlling the hydrogen that utilise the defects to absorb more hydrogen into the silicon and trap it in the defected regions where it is needed the most.