This report summarises the operations of the Lake Bonney BESS in its second 6-month period of operation, from July 2020 to December 2020. 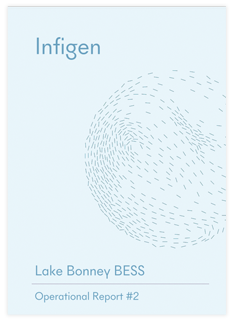 The Lake Bonney BESS is a 25MW / 52MWh energy storage system that utilises Tesla’s Powerpack battery technology and was installed alongside Infigen’s operational Lake Bonney wind farms that have a combined capacity of 278.5MW.

Records in South Australia were set for minimum electricity demand in both quarters of the reporting period. Average monthly energy prices saw a decline from the first half of the year, with limited market volatility also reflected in the average prices across the FCAS markets.

The discharging behaviour of Lake Bonney BESS during the second half of 2020 was consistent with the first half of the year, while the increased utilisation of the BESS as a load saw its capacity factor when charging increase from 2.74% to 8.56% in the same period.

An increase in negative prices has improved the value of an energy arbitrage strategy and has seen the charging behaviour of the BESS shift from prioritising charging overnight during the first half of the year to the midday period in the reporting period.