Most of the world’s electricity is produced in power stations using steam turbines, traditionally generated by the burning of fossil fuels.

Geothermal power is a low carbon emissions technology that can produce baseload electricity. 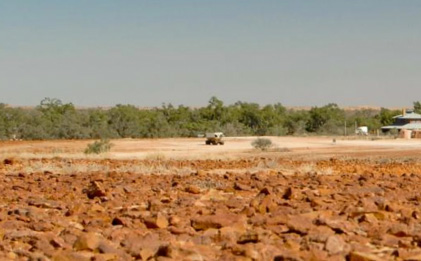 This report addresses the feasibility and economics of a number of heat and power projects options for Enhanced Geothermal Systems (EGS). It also summarises the Habanero Trial results and applies these to the potential further development of the Habanero resource.

This geothermal energy resource is accessed by drilling wells 4-5 kilometres deep into the granite rock and pumping water at high pressure into the rock to open up its naturally occurring fracture systems. Water is then circulated down injection wells into the hot rocks, through the granite and back up the production wells.

The energy in the hot geothermal brine produced at the surface was used to drive a steam turbine and produced electricity. This project is the first demonstration of EGS geothermal electricity generation in Australia. The 1 MWe Habanero pilot plant operated for 160 days in 2013 and prior to closure of the trial, the plant was operating at 19kg/s and 215 degrees celsius production well head temperature.

The next stage of the Cooper Basin Enhanced Geothermal Systems project investigated the use of geothermal energy to provide process heat to future natural gas developments in the Cooper Basin. This aligned with the ARENA International Geothermal Expert Group which identified that the most likely cost competitive commercial scale market in the next decade is for direct heat uses in the processing of shale gas, in locations where the geothermal resource and processing facility are co-located. A detailed industry wide desktop study of process heat applications for the geothermal energy industry was undertaken by CSIRO, on behalf of Geodynamics Limited.

With low oil price environment and the decision by Beach’s former joint venture partner Chevron not to participate in Stage 2 of the Nappamerri Trough Natural Gas (NTNG) Project, Geodynamics received notification from Beach Energy in November 2015 that Beach Energy elected not to participate in the proposed Farm-in agreement. The project therefore did not proceed to the next stages of demonstrating this application of geothermal energy given there would not be a potential end user co located.

In 2016 Geodynamics will plug and abandon all remaining geothermal wells and complete decommissioning and remediation activities of all geothermal facilities to acquit its environmental obligations in the Cooper Basin.

By providing a way to produce geothermal energy other than using volcanic systems, EGS opens up a new energy resource for potential use in many parts of the world.