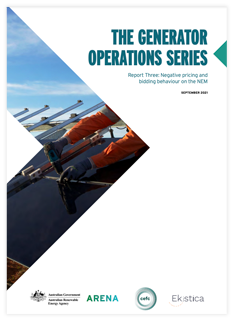 In 2016, when the Australian Renewable Energy Agency (ARENA) launched the $100 million Large-scale Solar (LSS) funding round, renewable energy (particularly solar) constituted a very small fraction of the energy mix. At then-current capital cost projections, this small contribution was expected to remain small for some time. Accordingly, oversupply of power during periods of high variable renewable generation, which can lead to negative power pricing, was not considered a major risk for projects. Many offtake agreements at the time were considered very low risk despite requiring projects to “switch off” to avoid generating during negative price intervals.

Today, solar energy (both large-scale and rooftop solar) are significant participants in the energy sector and negative pricing is a major risk for investors in the industry. “Economic curtailment” in response to negative pricing is the largest source of variable renewable energy (VRE) curtailment, accounting for 58 per cent of the total.

Generator bidding behaviour is becoming increasingly complex. The need to avoid negative pricing, abide by contractual obligations, ensure compliant bidding, minimise curtailment and reduce FCAS costs has led to over 35 per cent of solar and wind farms utilising automated bidding software in the last 2 years. “Rebidding” from generators, where volumes of energy are shifted across fixed price bands post “Gate Closure”, has substantially increased as the frequency of negative pricing intervals increase. Generators are increasingly becoming active, rather than passive, market participants, to avoid being dispatched during negative pricing intervals.

The Generator Operations Series: Forecasts vs Actuals from the LSS Projects

The fourth report in the Generator Operations series shares insights into the projects funded under ARENA’s Large-scale Solar PV Competitive Round.

The Generator Operations Series: Ramp Rates for Solar and Wind Generators on the NEM

This report analyses the impact of generator size (geographic footprint and installed capacity) on ramp rates for solar and wind farms in Australia.

This is the first of a series of reports on the operations of large-scale solar (LSS) projects in Australia.

The Generator Operations Series: Unlocking Curtailed Solar Energy on the NEM through Storage

This study estimates the potential generation, associated revenue and emissions reduction benefits that could be captured by co-locating large-scale battery storage at 44 NEM connected solar farms.