This is the first of a series of reports on the operations of large-scale solar (LSS) projects in Australia. By using granular data provided by a number of LSS projects funded by ARENA and the CEFC, the series will deep dive into real world operational successes and barriers the projects faced. 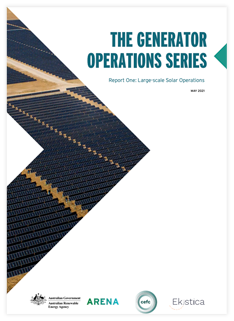 In 2016, ARENA and the CEFC invested in 14 large-scale solar (LSS) projects that have played an important role in accelerating the early development of the large-scale solar industry in Australia and the integration of utility-scale renewable energy generation in the National Electricity Market (NEM). This report presents the first in a series of analyses of the detailed operational data from those early projects. It provides a valuable perspective on how actual project performance has differed from the forecasts that were used
to justify investment decisions.

The Generator Operations Series: Forecasts vs Actuals from the LSS Projects

The fourth report in the Generator Operations series shares insights into the projects funded under ARENA’s Large-scale Solar PV Competitive Round.

The Generator Operations Series: Ramp Rates for Solar and Wind Generators on the NEM

This report analyses the impact of generator size (geographic footprint and installed capacity) on ramp rates for solar and wind farms in Australia.

This is the first of a series of reports on the operations of large-scale solar (LSS) projects in Australia.

The Generator Operations Series: Unlocking Curtailed Solar Energy on the NEM through Storage

This study estimates the potential generation, associated revenue and emissions reduction benefits that could be captured by co-locating large-scale battery storage at 44 NEM connected solar farms.